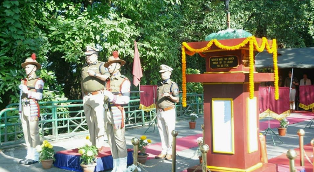 Gangtok: The Police Commemoration Day is observed in memory of those martyrs of the Indian Police Force, who sacrificed their precious life serving the nation. It was to honor the Ten CRPF who lost their life combating Chinese and also all other Policemen.21st October is observed every year as such. Sikkim joined the nation today for paying respect to martyrs.

‘Salami’ was followed by a Parade by Police personnel.’ We are soon going to have a Martyrs Memorial, in honor of martyrs Patridge,’ said DIG Special branch Prawin Gurung.