Protests break out across Pak after ECP disqualifies Imran

According to police sources, three major arteries leading to Islamabad have been blocked by the district administrator to avoid any untoward incident. 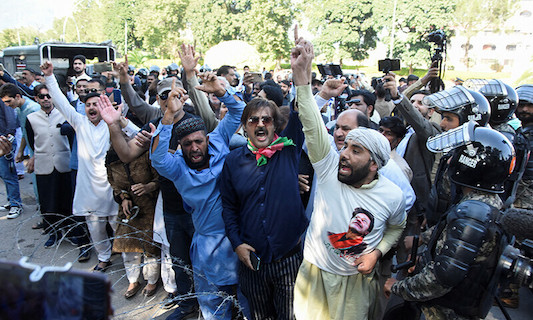 Islamabad: PTI leader Imran Khan’s disqualification from holding public offices by the Election Commission of Pakistan (ECP) on Friday steeped the country into agitation as angry PTI workers started protests against the decision, seen as a massive political blow to Khan’s party.

Following the announcement of the verdict, chaotic scenes were witnessed outside the ECP office where enraged PTI workers converged in large numbers, chanting slogans against the government.

According to police sources, three major arteries leading to Islamabad have been blocked by the district administrator to avoid any untoward incident.

The Islamabad traffic police advised commuters to use Peshawar Road or Lehtrar Road as Chungi No 26 and Athal Chowk in Bhara Kahu area have been closed to all types of traffic due to the protests and security concerns.

In Peshawar, protesters blocked a road near Pir Zakordi bridge and another near Stadium Chowk. They also put traffic on hold after burning tyres on the Motorway near the toll plaza.

Meanwhile, in Karachi, protesters led by party leaders Ali Zaidi, Firdous Shamim Naqvi, Mehmood Moulvi, and others staged a sit-in outside the Sindh ECP office. Reportedly, PTI workers tried to force their way into the ECP building but were repelled by the police amid thunderous slogan-chanting.

In Charsadda, protesters thronged the Farooq-e-Azam Chowk, where they were confronted by the ANP workers. Both sides shouted slogans against each other in the presence of a heavy contingent of police.

Swabi also emerged on the protest map after PTI cohorts barricaded the Mardan and Jehangir roads for traffic. Life in Shabqadar was also reported to have suffered from the PTI protests.

However, part of Mardan was seen cheering Imran Khan’s disqualification by distributing sweets among each other. A poor labourer from Mardan in a video message said he was so happy that Khan was gone. “I am poor so I could only buy half a kg of sweetmeat,” the labourer said.

According to Geo news reports pouring in from Naushehra, hundreds of fuming Khan fans crowded at Shawera Chowk and recorded their protest, which is currently underway.

Moreover, Mangora Road in Swat has also been closed by the protesters.

PTI’s supporters have also kicked off a protest at Shahdra Chowk in Lahore.

On the contrary, Hafizabad, a PML-N stronghold, was a scene of celebration with the N-league workers rejoicing over the ECP’s decision saying Imran Khan’s chapter had finally come to an end.

PTI youths blocked the M5 Motorway near Billiwala area in Multan’s suburbs, according to reports, while protesters sat in the middle of Delhi-Multan road in Vehari, bringing the heavy traffic to a halt.