The agency, however, said the air quality is likely to improve from the Severe to Very Poor category, with a wind speed of 8-18 kph. 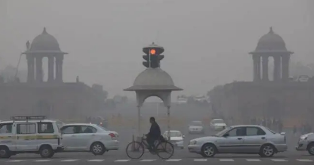 New Delhi: The air quality in the national capital continued to remain in the “severe” category on the third straight day, as the Air Quality Index (AQI) recorded on Saturday at 10 am was 464.

The agency, however, said the air quality is likely to improve from the Severe to Very Poor category, with a wind speed of 8-18 kph.

The PM2.5 level in the national capital reached 237, and the PM10 level in Delhi was recorded at 397 both in the ‘very poor category, as per data from the System of Air Quality and Weather Forecasting And Research (SAFAR).

Stubble-burning incidents contributed to 30 percent of the PM2.5 pollution in the capital on Saturday, data for SAFAR showed.

In the national capital region, the overall air quality remained in the poor category, with Noida (UP) and Gurugram (Haryana) recording 529 and 478 AQIs, respectively, and both in the highly toxic ‘severe’ category.

In view of worsening air quality, the Delhi government on Friday announced that the schools will remain shut from Saturday.

It also ordered 50 percent of its staff to work from home, while advising private offices to follow suit.

The Commission for Air Quality Management also decided to implement measures under stage IV of the Graded Response Action Plan in view of the worsening air quality in the Delhi-NCR.

Under the plan, there will be a ban on non-BS VI diesel-run light motor vehicles, including diesel trucks that would not be allowed entry into Delhi except for those carrying essential commodities or providing essential services.

However, all CNG and electric trucks would be allowed to enter Delhi, according to an order by the Transport Department.

If there is any violation of ban on plying of certain vehicles owing to the rise in pollution, it will attract a penalty of Rs 20,000, as per senior official.