The local people, traumatised by the sight of floating human bodies in the Ganga, fear the spreading of diseases in the area, which has not been spared by the ravaging Covid pandemic. 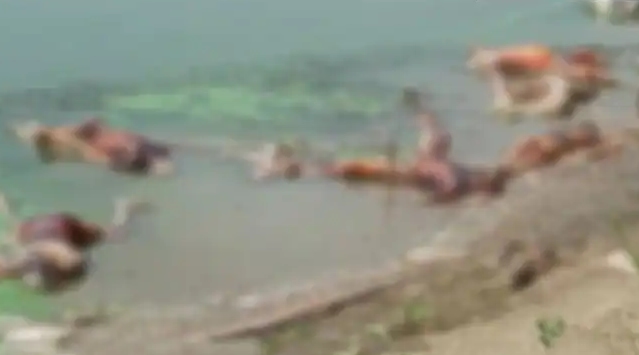 Lucknow: Close on the heels of recovery of several dead bodies of suspected COVID-19 patients found floating in Yamuna River in Hamirpur, now many corpses were reportedly washed up and found on the banks of River Ganga in Ghazipur district on Tuesday.

A probe has been initiated by the local administration into the matter. A day before, several bodies have also been recovered in the river in the neighboring Buxar district of Bihar.

“Our officers are present on the spot to investigate and ascertain where they came from. A probe into the matter is underway,” MP Singh, Ghazipur’s District Magistrate told local media persons soon after the recovery of the bodies on Tuesday.

The local people, traumatised by the sight of floating human bodies in the Ganga, fear the spreading of diseases in the area, which has not been spared by the ravaging Covid pandemic.

They complained of stench coming from the bloated, decomposed corpses and accused the authorities of quiescent.

“We informed the administration about the matter, but no action has been taken by them. If the situation continues like this, there is fear of us getting infected by Coronavirus,” Akhand, a resident of the area claimed before the media persons.

It may be mentioned that the incident of floating and piling up of corpses first in Hamirpur, then in Bihar and now in Ghazipur sparked fears about the scale of the Covid crisis in the country. Authorities believe the relatives of those who succumbed to the virus, may not have been able to find space for the last rites.

Union Minister of Jal Shakti Gajendra Singh Shekhawat on Tuesday termed the incident as “unfortunate” and asked states concerned to take immediate cognizance. “The incident of corpses found floating in the Ganga in Buxar region of Bihar is unfortunate. This is definitely a matter of investigation. The Modi government is committed to the cleanliness of ‘mother’ Ganga. This incident is unexpected. The concerned states should take immediate cognizance in this regard,” Mr Shekhawat tweeted.