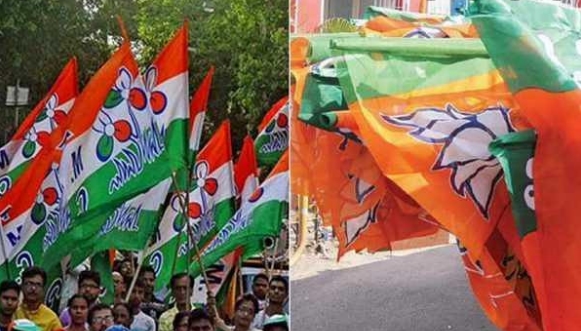 She stated that police had gone to the hotel to seize her vehicle late last night but she refused to meet police at night and requested them to go the next morning.

Accordingly, policemen went to the hotel this morning and asked Saayoni to face their questioning in the police station, as a case has been filed against her of an attempt to murder. No details of the FIR and the complainant they refused to share and compelled her to come to the police station.

“As soon as Saayoni and all of us reached the police station, a large number of BJP cadres entered the area and started pelting stones on us. They destroyed the vehicle of our state convener and a few motorbikes stood outside the police station. Our workers and some policemen have also received injuries but police didn’t take any action rather helped the attackers to escape the place,” Dev alleged.

Sushmita questioned how BJP goons got to know the information of the arrival of Saayoni and TMC leaders within a few minutes and organized the attack with such a large number of cadres in the Chief Minister Biplab Deb’s constituency where only last night from an election rally Deb encouraged his workers to prevent Trinamool and other oppositions.

“It’s established now Biplab Deb himself coordinated the attack in the police station by his cadres on us forcing police to trap us in the police station a day before Abhishek Banerjee’s roadshow in Agartala. We got to know Saayoni posted a video in social media against Chief Minister and she made some remarks against CM’s speech last evening and his cadres last night also chased her with a weapon in front of him and his police,” Dev alleged further.

She added that TMC has lodged as many as 11 FIRs against BJP for attacking their candidates after the direction of the Supreme Court to the state government to allow opposition parties to campaign
and to ensure fair elections but none has been arrested yet. Instead, police are hatching a conspiracy against TMC with the direction of the BJP party.

“We seek action from Supreme Court and High Court where Chief Minister himself, his cabinet members, MLAs, leaders, police and administration work together to prevent TMC. Deputy Speaker Biswa Bandhu Sen openly directed BJP cadres yesterday to stop everybody other than BJP from casting the vote. The Election Commission is not responding and the police chief has surrendered to party in power, how can an election be held here,” she questioned.

Tripura CM yet to finalise his council of ministers