In the meantime, the ‘Kalank’ actor has expressed gratitude for being appointed as the brand ambassador for the Government of Arunachal Pradesh. 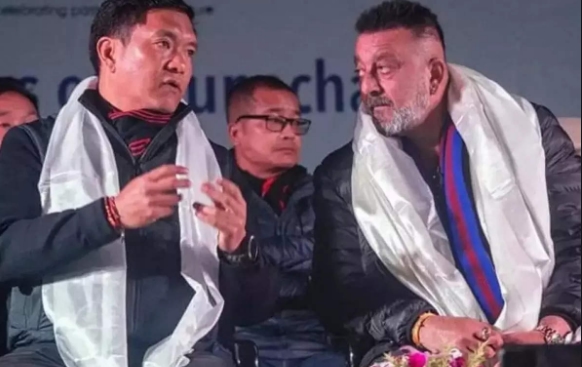 Dutt has been appointed as the brand ambassador for the month-long statewide Golden Jubilee celebrations, marking the 50th year of the naming of Arunachal Pradesh.

As part of the media campaign, Dutt will feature in a series of promotional films for Arunachal Tourism. In addition, the actor will also engage with the local youths on a series of initiatives on substance abuse, and other issues that cause a lot of concern in the state.

Dutt, who arrived all the way from Mumbai by a chartered flight to Dibrugarh and then by a helicopter to the picturesque Mechuka Valley on Monday afternoon, has launched the media campaign in presence of Chief Minister Pema Khandu, Assembly Speaker Pasang Dorjee
Sona and filmmaker Rahul Mittra (brand advisor) on Monday afternoon.

The month-long Golden Jubilee celebrations will commence at Ziro in Lower Subansiri district on January 20 next, as it was in Ziro that Arunachal Pradesh got its present name from erstwhile
NEFA (North-East Frontier Agency) as well as the Union Territory status in 1972. The closing ceremony will be held in Itanagar on the occasion of Statehood Day on February 20, 2022.

In the meantime, the ‘Kalank’ actor has expressed gratitude for being appointed as the brand ambassador for the Government of Arunachal Pradesh.

Taking to Twitter, Dutt wrote: “Very honoured to be appointed as the Brand Ambassador for the Government of Arunachal! Looking forward to shooting a media campaign with @rahulmittra13 to celebrate 50 years of statehood! Thank you CM @PemaKhanduBJP Ji & Assembly Speaker @pasang_sona Ji for the grand welcome!”

Thanking the actor, CM Khandu said in a tweet, “Thank you, @duttsanjay Ji. With you as Brand Ambassador for #50YearsOfArunachalPradesh our beautiful state will get the deserved limelight in terms of #Culture #Tourism and #Adventure. Looking forward to your media campaign.”

“Who can be the perfect Brand Ambassador for #50YearsOfArunachalPradesh? Meet @duttsanjay in picturesque #Mechuka! Yes, he’s the man! The ever-affable #MunnaBhai kicks off the month long celebration: Jan 20- Feb 20 Feb ’22. Welcome all!@ArunachalTsm #ArunachalPradesh”, Khandu
stated in another tweet.

New Delhi: The Union government on Wednesday banned the Popular Front of India (PFI) and some other associations linked...
World