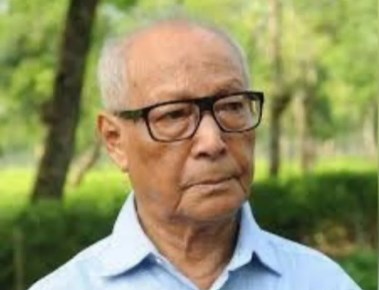 Borgohain was earlier admitted to Guwahati Medical College & Hospital (GMCH) after testing positive for COVID-19 on April 24 and later on May 7, he was discharged after his the report came negative.

Borgohain, former Editor-in-Chief of Niyomiya Barta, was awarded the 1978 Sahitya Akademi Award in the Assamese language for his novel Pita Putra.

Prime Minister Narender Modi condoled the demise of Homen Borgohain “Shri Homen Borgohain will be remembered for his rich contributions to Assamese literature and journalism.”

“His works reflected diverse aspects of Assamese life and culture. Saddened by his passing away. Condolences to his family and admirers. Om Shanti,” the Prime Minister wrote on Twitter.

“The Assamese people have lost one guardian today Homen Bargohain, a a brilliant journalist who enriched the literary world of Assam with his unique creations, is one of the brightest astrologers in the intellectual sky of Assam. His demise created a huge void between us,” Assam Chief Minister Himanta Biswa Sarma tweeted in Bengali.

Assam Govt forms panels to work out modalities for results of HSLC,HS exams