Three days ago, the opposition leader of ADC from BJP Hansa Kumar Tripura along with 6000 BJP voters crossed over to TIPRA. 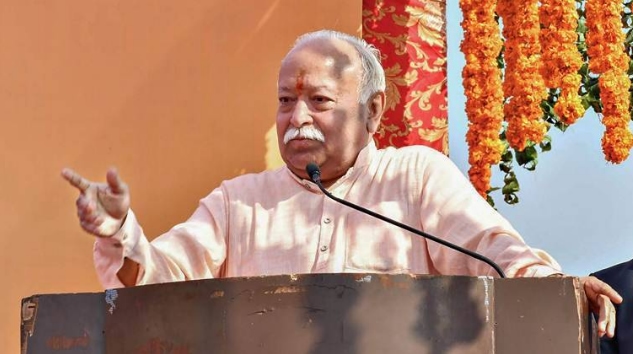 Agartala: Security has been beefed up in Agartala MBB airport, Ujjayanta palace, and RSS state headquarters in the Southern part of the city in view of the scheduled visit of Rashtriya Swangsevak Sangh (RSS) Chief Mohan Bhagwat on Friday who enjoys ‘Z+’ security coverage.

He is scheduled to arrive here in the late afternoon from Delhi, from the airport Bhagwat will directly reach to palace to hold a meeting with Rajmata Bibhu Kumari Devi – the mother of ruling TIPRA Motha Chief of Tripura Tribal Areas Autonomous District Council (ADC) Pradyot Kishore Debbarman.

The meeting of Bhagwat at the palace with the royal family has triggered speculation about the BJP’s attempt to win over Pradyot Kishore, who has been fighting against the former party alleging its terror tactics and misrule in Tripura.

The BJP had earlier made several attempts including offering Pradyot Rajya Sabha seat and central minister post but it didn’t work.

After BJP lost to Pradyot’s NGO turned political front Motha in ADC elections last year, BJP lost all of its bases in hills and tribal-dominated areas of the state, which covered as many as 25 assembly seats in 60 members’ house.

Three days ago, the opposition leader of ADC from BJP Hansa Kumar Tripura along with 6000 BJP voters crossed over to TIPRA.

Bhagwat’s Tripura visit and holding meeting in the palace a before the visit of BJP National president J P Nadda is assumed to be significant in Tripura politics, said a senior BJP leader of the state adding, “Bhagwat’s visit to the palace will create confusion among the common TIPRA supporters and sufficient enough to send a message to tribals.”

However, Pradyot clarified that Bhagwat expressed his interest to see the royal chair and palace and meeting Rajmata.

As a royal gesture, he was invited to the palace and accepted the royal reception – nothing beyond this and added, “Moreover, I have no meeting with him. Bhagwat’s visit to the palace and meeting Rajmata is simply courtesy.”

According to the report, at night Chief Minister Dr Manik Saha, Deputy Chief Minister Jishnu Dev Varma, and other senior leaders of the BJP would meet RSS Chief at Sewadham to discuss the organizational issues and seek advice ahead of upcoming assembly elections.

Bhagwat is scheduled to address a religious gathering at Sarbong village of Amarpur in Gomati district, about 100 kilometers on Saturday after opening a Kali temple. From there he will directly go to the airport to travel back to Delhi in the afternoon.