RS: 19 MPs suspended for rest of the week

"It is against the norms, please don't compel the Chair to use Rule 256. Please don't force me to name you under Rule 256," the deputy chair said. 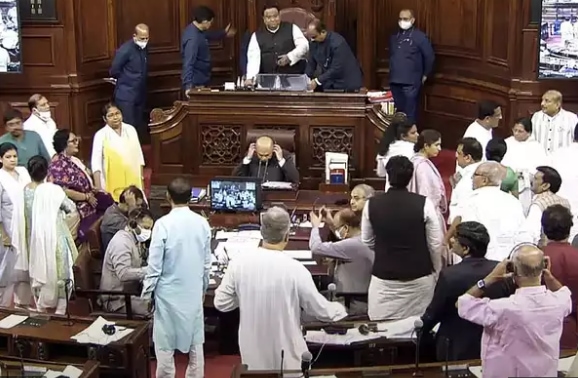 New Delhi: A total of 19 Opposition MPs in the Rajya Sabha were on Tuesday suspended for the remaining part of the week for creating ruckus in the Well of the House despite repeated warnings by the Chair.

Citing rules and procedures of the House, Deputy Chairman Harivansh warned the members against displaying placards but his warnings were not heeded.

“It is against the norms, please don’t compel the Chair to use Rule 256. Please don’t force me to name you under Rule 256,” the deputy chair said.

Exercising the provisions of Rule 256 in the post-lunch session, Harivansh decided to suspend the Opposition MPs for the remainder of the current week for showing “utter disregard to the House and the authority of the Chair”.

The House was adjourned for 15 minutes after the announcement of suspension by the Chair.

Later when the House reassembled, suspended opposition MPs didn’t leave the house and continued to protest forcing the Chair to adjourn the House for another one hour.

The House began on a stormy note earlier in the day witnessing repeated disruptions with Opposition members pressing for suspension of business to discuss issues raised by them including inflation, hike in GST rates, and the Gujarat hooch tragedy.

The decision to suspend the MPs came a day after four Congress MPs in Lok Sabha were suspended for the entire Monsoon Session ending August 12 for holding placards inside the House despite warnings by Speaker Om Birla.

Ahead of the session a list of Dos and Don’ts was issued to the members in view of maintaining decorum in the Parliament. It was made clear that unparliamentary words and actions will not be allowed.