The midfielder has put pen-to-paper on a short-term contract with the Gaurs, which will see him remain a part of the Club till the end of this season. 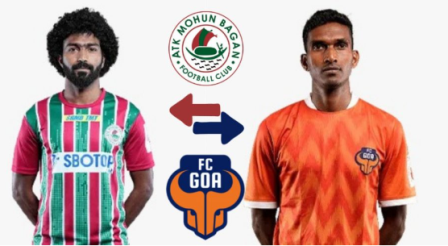 The midfielder has put pen-to-paper on a short-term contract with the Gaurs, which will see him remain a part of the Club till the end of this season.

FC Goa would also like to announce that Glan Martins will leave the Club, having agreed terms with ATK Mohun Bagan on a long-term loan move.

“I’m delighted to return to FC Goa, having played here for two and a half seasons previously. I had always felt that I had some unfinished business with the team, and hence I’m honoured to have received an opportunity once again. The prospect of performing in front of my home fans again and making them proud excites me as well,” Rodrigues said, after signing on the dotted line for the Gaurs.

“With the team currently in the top-five in the league, my primary objective would be to contribute successfully to our quest of making it to the playoffs. The ultimate intention is to win the ISL Trophy with FC Goa, and we’re going to work together as a team to get there,” he further added.

“Lenny is an experienced player who was a constant in our team for the best part of 2.5 years. His arrival gives us a player who has plenty of know-how in high pressure situations and excellent tactical nous. He’s familiar with the team and everyone else around him, so he will take zero time to settle in and will be ready to play and available to the coach for selection from the get go,” he said.

One of the most experienced footballers in India right now, Lenny Rodrigues kick-started his footballing career with the Nagoa-based Fransa-Pax FC’s youth team. Salgaocar FC handed him his first professional contract and later he joined Churchill Brothers where he transitioned from being a forward to a midfielder.

At Churchill, he won the I-League twice, the Federation Cup and the Durand Cup. He spent six seasons with the Red Machines, before becoming the first-ever pick in the Inaugural ISL Domestic Draft by FC Pune City in 2014.

Loan stints at Dempo SC, Mohun Bagan and Bengaluru FC followed for the 35-year-old, before the latter snapped him up on a permanent deal in 2017-18, winning the Hero Super Cup and the Federation Cup once again with them at the end of their campaign.

In 2018, he joined FC Goa for the first time. In the next two years, the midfielder started in each of the 45 games that the Gaurs played, winning the Super Cup once again in 2018-19 and the Hero ISL League Winners’ Shield the following season. During this period, he played alongside Carlos Pena, the Club’s current head coach.

January 2021 saw Rodrigues move to ATK Mohun Bagan, and now, exactly two years later, he returns to FC Goa for a second stint. Overall, he has made nearly 300 appearances for club and the Indian national team.