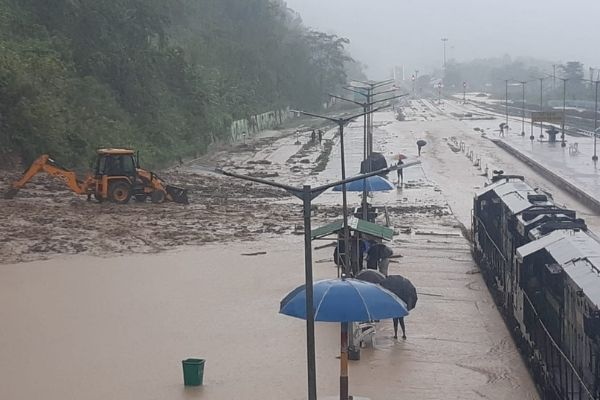 Guwahati: Road connectivity of Barak Valley was snapped with the rest of Assam as heavy downpours over the past few days resulted in severe floods and landslides.

The heavy rain has resulted in disruption of the road as well as rail transportation in the region affecting lakhs across the region.
Due to the unrelenting heavy downpour, some parts of the road on NH-06 under Lumshnong Police Station in East Jaintia Hills of Meghalaya have also been damaged severely.

Images of one severe landslide incident have surfaced on social media where it can clearly be seen that a truck along with another vehicle (a MUV) fell into a gorge caused by a landslide.

Already battling heavy rains, flash floods, landslides and more calamity over the past week, all of Northeast India is likely to see more inclement weather in the coming days, the weatherman has said.

The Indian Meteorological Department has forecast extremely heavy rains over parts of Assam, Meghalaya, Sub-Himalayan West Bengal and Sikkim. They also predict heavy rains over other parts of the Northeast, including Arunachal Pradesh, Nagaland, Manipur, Mizoram, and Tripura.