Dr. Samujjal Bhattacharya, Chairman, Samuel B. Jyrwa, Advisor, Sinam Prakash Singh, Gen Secretary in a statement Thursday said that the clashes that erupted in the border of these two states sent shockwaves throughout the entire region as news from ground zero keep spreading like wildfire. 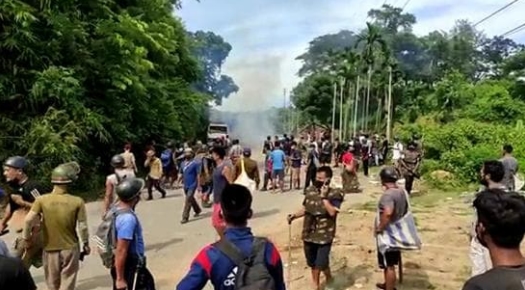 Imphal: The North East Students’ Organisation (NESO) representing eight major students movement in the region expressed anguish and disbelief at the recent border conflicts along the Assam-Mizoram boundary which was condemnable and which had taken a huge toll on human lives, injuries to scores of people and destruction to property.

Dr. Samujjal Bhattacharya, Chairman, Samuel B. Jyrwa, Advisor, Sinam Prakash Singh, Gen Secretary in a statement Thursday said that the clashes that erupted in the border of these two states sent shockwaves throughout the entire region as news from ground zero keep spreading like wildfire.

The fragile situation along the Assam-Mizoram border was a reminder of how vulnerable security of border residents can be when such conflicts arise, it was stated.

It appears that many levels of boundary talks bear no solution to this plaguing problem. The NESO had been sending numerous appeals to various state governments in the region to resolve the complex boundary dispute with utmost sincerity so as to maintain peace and harmony amongst the indigenous communities of North East. NESO had also requested the Central Government to intervene in the best interest of the stakeholders on many occasions, it was added.

Recently, the organization sent a representation to the Union Home Minister, Amit Shah on the vexed border issues during his visit to Meghalaya.

Border disputes vary and differs from area to area NESO added and urged upon all State Governments to be committed to solve this long pending problem once and for all and if necessary, the Central Government should be a party in these dialogues and NESO on its part will continue to encourage peoples to peoples contact and peoples to peoples relationship along the border areas, it was added.

NESO called upon all the indigenous peoples that this issue was not an ethnic issue but of border dispute in which the respective State Governments were duty-bound to solve. If a solution arrives whereby borders will be properly demarcated with a unanimous settlement, then peace will usher between different states and the people residing along the borders can live without fear and in harmony amongst themselves. it was added.