The rescuers are "hoping against hope" to find the workers of the Tapovan power project who have gone missing for over three days now. 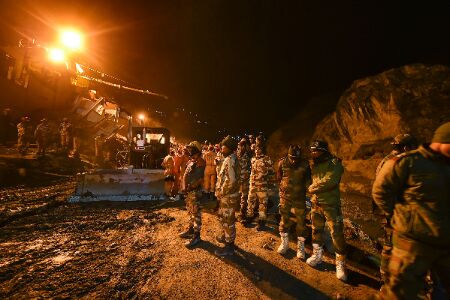 Joshimath (U’khand): Rescuers from multiple agencies like the ITBP, NDRF and Army continued their operation on Wednesday to penetrate deeper through tonnes of silt to reach out to workers trapped inside the Tapovan tunnel as the toll in the Uttarakhand flash floods has mounted to 32 with over 170 missings, the PTI reported.

The centre of operations, post the Sunday disaster in the border district of Chamoli, remains the large tunnel where an estimated 30-35 workers are believed to have been trapped after the Alaknanda river hurtled down in spate as a result of a possible glacier burst or avalanche in the Himalayas.

The rescuers are “hoping against hope” to find the workers of the Tapovan power project who have gone missing for over three days now.

With every minute passing by, the concern about the safety of these men is mounting.

Officials on the ground and those monitoring the rescue from Delhi told PTI that continuous accumulation of slush and silt inside the tunnel is the biggest hurdle for the rescuers.

“Heavy machines have removed more slush from the tunnel the whole night. A joint team of ITBP, NDRF, SDRF and sister agencies entered into the tunnel this morning.

“The tunnel is approachable till about 120 meters but more slush and water coming from inside the tunnel is making the way ahead difficult,” Indo-Tibetan Border Police force spokesperson Vivek Kumar Pandey said in Delhi.

Measures like drilling to take oxygen to those trapped inside the tunnel are being contemplated, project consultant A K Shrivastava said at the site in Tapovan.

The over 1,500 metre tunnel has become the focal point of rescue operations even as family members of those trapped spend hours outside with a bated breath to hear some good news about their kin.

The multi-agency group of rescuers also flew a camera-equipped drone inside the tunnel on Tuesday but due to darkness, it could not pinpoint the location of survivors or the way forward, a senior National Disaster Response Force officer said.

“We are still hopeful. The teams will continue making attempts, clearing the slush to enter deeper into the tunnel and locate the trapped,” he said.

The ITBP has deployed a team of about 450 personnel apart from those from the NDRF, state disaster response force and the Army.

When contacted, Uttarakhand Director General of Police Ashok Kumar said all possible efforts will be made to save the lives of those trapped inside the tunnel.

As per the latest updates provided by the State Emergency Operation Centre here, 32 bodies have been recovered from different places in the disaster-hit areas while 174 are still missing.