The 24-year-old might consider himself a bit unlucky when referee Umesh Bora overlooked a clumsy challenge from East Bengal’s VP Suhair on him inside the box. 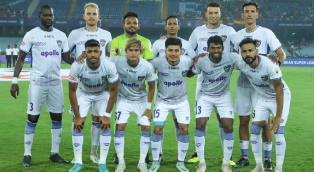 Kolkata: Vafa Hakhamaneshi’s second-half strike proved to be enough as Chennaiyin FC edged past East Bengal 1-0 in a Hero ISL match at the Salt Lake Stadium here on Friday.

The Thomas Brdaric-side, thus, returned to winning ways after having lost their previous game to FC Goa. The crucial away win also helped Chennaiyin climb to fifth in the table with seven points from four games.

In what proved to be an exciting encounter, both sides were reduced to 10 men, with Vafa and East Bengal’s Sarthak Golui seeing red cards each. But Chennaiyin coach Brdaric said he was happy with the way his team performed as they kept the first clean sheet of the season. In fact, the last time that CFC had kept a clean sheet was back in January early this year when they beat Jamshedpur FC 2-0.

“I am quite satisfied with the way we performed. I am happy for the fans and the owners. My boys showed the right mentality, and we kept fighting till the end. Now, we look forward to building on this win,” Bradaric said after the match.

The 24-year-old might consider himself a bit unlucky when referee Umesh Bora overlooked a clumsy challenge from East Bengal’s VP Suhair on him inside the box.

Nevertheless, Thapa controlled the midfield with his attacking flair and ensured that his team enjoyed a lion’s share of possession. He could also have been on the scoresheet, but his powerful left-footed shot was saved by East Bengal goalkeeper Kamaljit Singh.

Chennaiyin were tidy in their gameplay from the start as defenders Vafa, Fallou Diagne, and Ajith Kumar put in a good shift. Their tight marking didn’t allow East Bengal forwards space to operate. And even when East Bengal created chances, goalkeeper Debjit Majumder, who was returning from suspension, thwarted the attack with good saves.

After a goalless first half, Chennaiyin finally opened the scoring in the 69th minute of the match. Sangwan, who replaced Narayan Das in the first half, sent in a corner at the near post. Vafa, using his physicality, bulldozed past his marker and met the ball with a beautiful header that found the back of the net.

However, the Iranian saw his second yellow card of the match in the very next minute and was sent off because of his celebrations.

East Bengal, though, couldn’t take numerical advantage of the situation as Golui also saw his second yellow of the game in the 74th minute when he elbowed into Thapa’s face.

Chennaiyin held firm for the remaining 15 minutes to take home full three points and notch up their second win of the campaign. The Marina Machans next face Mumbai City at home on November 12.