Re-verification of NRC will be on top priority list: Assam CM

Delving on the issue of insurgency, he appealed to the ULFA (I) chief Paresh Barua to come forward for peace talks. 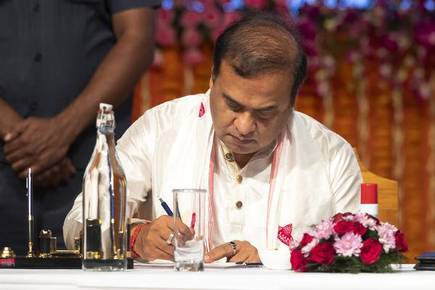 Guwahati: Assam Chief Minister Himanta Biswa Sarma today said that the re-verification of the National Register of Citizens (NRC) will be on the top priority list as his government will also continue its effort to protect cows under the Indian constitution.

Replying to the discussion on Motion of Thanks on the Governor speech Sarma touched upon several issues ranging from insurgency to the flood management.

Calling for constructive criticism from the opposition Sarma said that in ninety per cent issues there is a consensus between the government and the opposition parties.

“We will first work on the issues which has consensus. This house can build new Assam,” Sarma said, adding that the government has taken a pledge not to do any bad work and it’s the duty of opposition to show the correct path everytime whenever it is going on a wrong path.

Delving on the issue of insurgency, he appealed to the ULFA (I) chief Paresh Barua to come forward for peace talks.

Talking about the burning issue of floods in the state, Mr Sarma if dredging in Brahmaputra is not possible to make Assam flood free the dredging will be taken up in its tributaries.

He announced a setting up new agency for the construction of embankments which are build to stop the swelling waters of the Brahmaputra during the monsoon.

Besides, he also spoke about protection of the land of the indigenous people from the encroachments.

Sarma was sworn in as chief minister of Assam after the BJP managed to retain power in the recently-concluded assembly election. The BJP won 60 seats in the 126-member assembly and its allies another 15.