The editorial in its mouthpiece 'Saamana', the Sena compared Rane with a 'croaking frog'. It also likened him to a "balloon with holes", which, it said, will never go up no matter how much the BJP tries to put fill it with air. 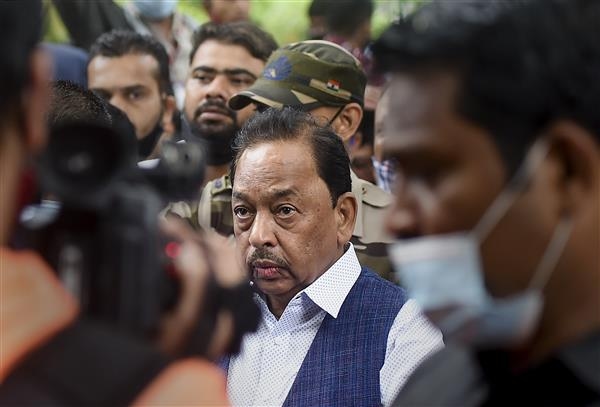 The editorial in its mouthpiece ‘Saamana’, the Sena compared Rane with a ‘croaking frog’. It also likened him to a “balloon with holes”, which, it said, will never go up no matter how much the BJP tries to put fill it with air.

Despite being given the post of a Union minister, Rane has been behaving like a “roadside gangster”, it alleged.

“Narayan Rane was never a great or conscious person. He earned his reputation while in Shiv Sena. After Rane quit the party, Shiv Sena defeated him four times in Lok Sabha and Vidhan Sabha polls. Hence, if one has to describe Rane, then he could be called a perforated balloon. No matter how much air is filled in this balloon, it will never go up,” the editorial said.

“But BJP has decided to inflate this perforated balloon. Some people also liken Rane to a frog who croaks. Who is he? He has himself declared that he is ‘not a normal person. Then, the BJP has to check if it’s a bunch of abnormal people,” the editorial said.

“Rane has made the central government hang its head in shame. Given Rane’s past record, Modi-Shah should take his comments against Thackeray seriously. If anybody had spoken in this manner about the Prime Minister, he would have been booked under sedition charges. Rane’s crime is similar,” the editorial said.

It said Maharashtra is a state which runs as per law and such acts will “not be tolerated after a certain point”.

The prime minister will not tolerate such acts, the Marathi daily said, adding that the BJP “will have to pay for this heavily”.

“The hand that threatens to attack a chief minister should be pulled out legally. The previous Devendra Fadnavis government in Maharashtra has made a few intellectuals languish in jail on allegations that they conspired to kill Prime Minister Narendra Modi,” the editorial said.

Threatening to physically assault the chief minister is like hurting the sentiments of 105 martyrs of the ‘Samyukta (united) Maharashtra movement.

Rane has hurt Maharashtra, and (state BJP leaders) Devendra Fadnavis and Chandrakant Patil have been supporting him, the Sena said.

“Any cultured leader would have apologised and ended the matter, as nobody is above the state. But, for the BJP, Maharashtra’s pride and prestige of the chief minister are immaterial,” it claimed.