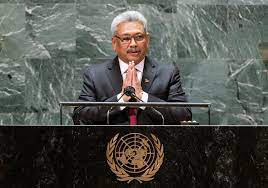 Colombo: Parliamentarian Channa Jayasumana has said that all the members of the former ruling party, including former President Gotabaya Rajapaksa, and himself were responsible for the collapse of the country’s economy and no one could escape from collective responsibility.
He said this while answering a question raised by the media regarding a statement made by Transport, Highways and Mass Media Minister Dr Bandula Gunawardana, the Daily Mirror reported on Tuesday.

“It is better to reveal the truth as to who gave bad advice to the former President. Revealing those details would be helpful to the country in identifying the persons responsible for the issues,” he said.

“We gave our ideas to the former President before the elections, and he considered them in a free manner and said those ideas would be implemented. But after he became President, he did not listen to our ideas.
“I think that was the main reason for his failure. As we saw, several members of his family and several close associates have given him advice,” the Mirror quoted him as saying.

“That is the main reason that makes him unpopular,” he said. “We still don’t know who came up with those ideas. “That failure continues, and we all have become victims of it,” Jayasumana said.

“Therefore, everyone in the government that came under President Gotabaya should be responsible,” he said