Rahul quizzed for 50 hrs at the behest of Centre: Cong

The grand old party had earlier termed the probe against its former president as "political vendetta". 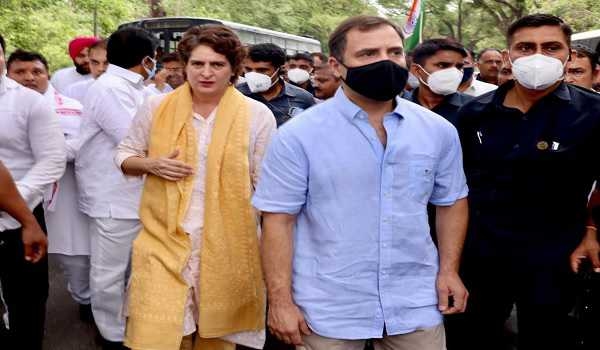 New Delhi: The Congress on Wednesday launched a fresh attack on the BJP-led government at the Centre after its former president Rahul Gandhi was questioned by the Enforcement Directorate (ED) in connection with the National Herald case for the fifth time on Tuesday, and said the latter was quizzed for 50 hours by the probe agency at the behest of the government.

“The way Rahul Gandhi Ji was questioned for 50 hours in five days, this is a record itself as it never happened before. The ED was pressurized to do so,” Rajasthan Chief Minister and senior Congress leader Ashok Gehlot said at a press conference at the party headquarters here, in a veiled attack on the ruling BJP.

He also accused Delhi police that it targeted party leaders, especially women, who protested against the government over the matter.

The grand old party had earlier termed the probe against its former president as “political vendetta”.

“This is the first time that we had seen ‘terror’ of police. They targeted Congress leaders, especially women and seniors. BJP is setting a dangerous trend. This is a matter of concern,” Gehlot said.

Accusing the BJP and RSS of doing “divisive” politics, the senior Congress leader said, “The situation across the country is very worrying. They are inciting people in the name of religion. They never accepted Gandhi. BJP is looting the country by doing corruption.”

Endorsing his sentiment, senior Congress leader and MP Jairam Ramesh, who was also present, while attacking the ruling BJP said, ” This is a politics of revenge.”