Members of the public attending file past the catafalque to pay their respects. 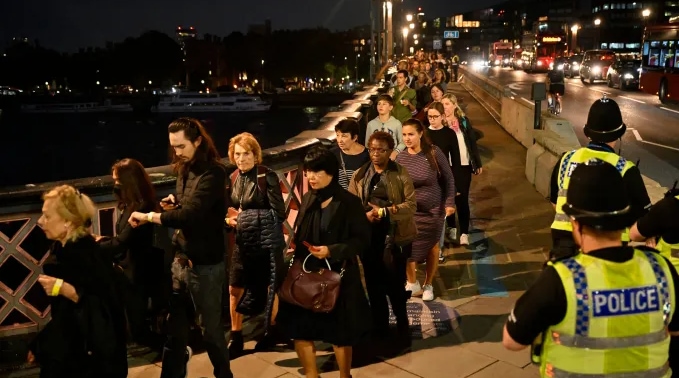 London: The queue to see Queen Elizabeth II lying in state at Westminster Hall remains near total capacity with an expected wait time of at least 24 hours, according to the UK government’s live queue tracker.

People have been advised not to travel to join the queue.

The UK government website said: “The accessible queue is paused and will resume at midday on 17 September.

The queue spans several miles, starting at Southwark Park and going along London’s South Bank of the River Thames before getting to Westminster Hall.

Mourners in London have been braving a chilly night with waiting times of at least 24 hours to pay their last respects to the Queen, the BBC reported.

The London Ambulance Service (LAS) has advised people to ensure they bring any regular medication and appropriate clothing while waiting in line.

The service urged people to follow advice on the government website, drink plenty of water, and eat regularly.

During the Lying-in-State period, the Queen’s closed coffin rests on a raised platform, which is called a catafalque, inside Westminster Hall in the Palace of Westminster (also known as the Houses of Parliament).

Members of the public attending file past the catafalque to pay their respects.

The Queen’s Lying-in-State at the Palace of Westminster opened to the public at 5 pm (local time) on Wednesday. It will be open 24 hours a day until it closes at 6.30 am on Monday, when the funeral takes place.

The queue may close early to ensure as many visitors the queue as possible can enter the Palace before the Lying-in-State period comes to an end, the BBC said.