However, BJP MLA Ashwani Sharma vehemently opposed the resolution while taking part in the deliberations on the resolution and subsequently walked out from the assembly in protest. 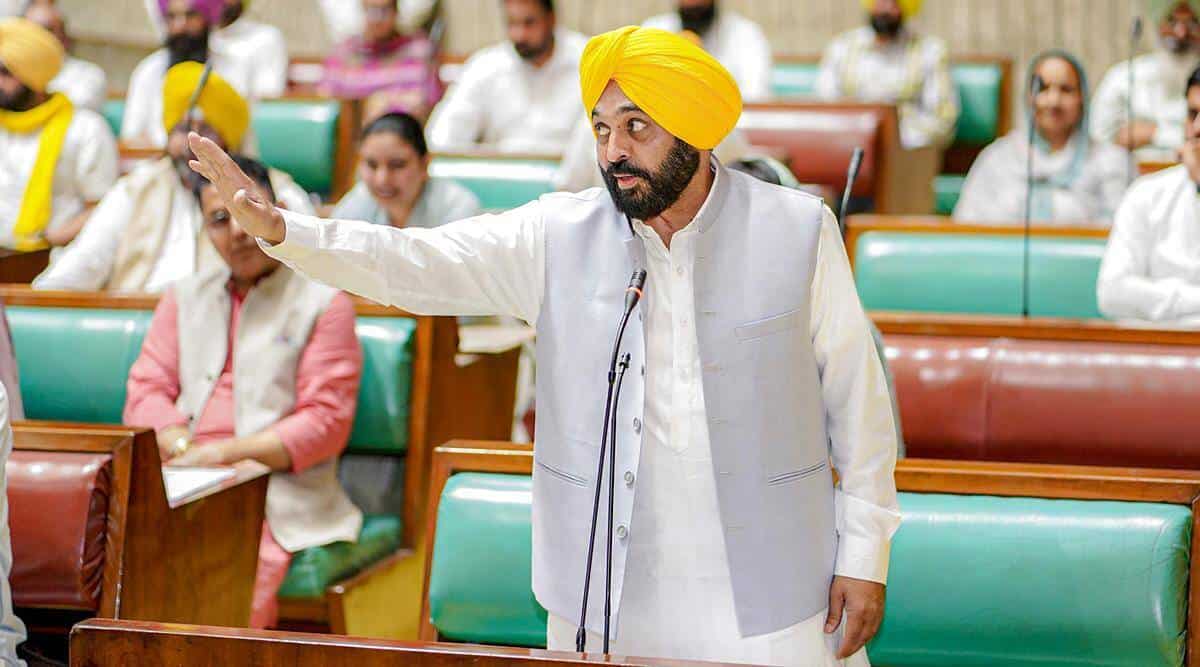 Chandigarh: The Punjab Assembly on Friday passed a resolution demanding immediate transfer of Chandigarh to Punjab and urged the Centre to respect federalism by not disturbing the balance in the administration of the city and other common assets the state shares with Haryana.

However, BJP MLA Ashwani Sharma vehemently opposed the resolution while taking part in the deliberations on the resolution and subsequently walked out from the assembly in protest.

Winding up the discussions after taking into consideration the points raised by various members of treasury and opposition benches during the one day special sitting of first session of 16th Punjab Vidhan Sabha, Chief Minister Bhagwant Mann said his government would exploit all channels by seeking prior appointment from Centre to call on Prime Minister and Home Minister to mount pressure on Union Government in order to take their fight for legitimate rights of Punjab to its logical end.

Giving a clarion call to all the members of opposition, the Chief Minister solicited wholehearted support and cooperation from all the parties thus cutting across political affiliations as this issue was quite sensitive and of immense emotional and social significance.

Therefore, in the larger public interest all of us should unite on a common platform to get the justifiable demands of state implemented from Centre in the letter and spirit. Sharing his past experience as a parliamentarian, Mann exhorted all the MPs and MLAs from the state to exhibit the same spirit of unity and bonhomie as often demonstrated by the leaders of Southern states to safeguard the rights of their respective states rising above the vested interests and petty personal considerations.

Lambasting the BJP led Central government, Mann said that its leadership was bent upon to indulge in vendetta politics in general and especially in states like Punjab, Delhi, West Bengal where its leadership has miserably failed to get people’s mandate for formation of its government.

He also assailed the Centre for usurping the powers vested in the states thus tinkering with the federal structure to pursue their political interests. Citing an example how Centre thrusted three black anti-farmer laws and later repealed them after buckling under tremendous pressure due to farmers’ angst across the country.

Referring to apathetic and step motherly treatment meted out to Punjab by Centre, Bhagwant Mann as MP narrated an incident when ultras attacked the Pathankot airbase in 2016 and the state Police force accompanied by Central security forces valiantly retaliated the attack and assisted in eliminating terrorists without caring for their personal safety.

To his utter surprise, Mann said Centre raised a bill of Rs 7.50 crore for providing Central security forces to the state in this regard. He said this amount was finally waived off with the personal intervention of the then Union Home Minister Rajnath Singh following his meeting along with his fellow MP Sadhu Singh.

He said, “It is highly paradoxical that the border state which is facing the brunt of terrorism is also made to pay hefty amount on account of its security”. He dared Centre to clarify, “Don’t you consider Punjab as a part of the country”.

Highlighting the issue of drugs in the state, CM Mann said that he failed to understand despite the border of Rajasthan having an area more than 2.5 times and little over half of J&K’s border along with Pakistan without fencing was hardly facing any problem of drug abuse while Punjab was still grappling with the menace of drugs.

Without mincing words, he said ‘Chitta’ is being manufactured here in the state and those involved in such heinous activities and responsible for genocide of Punjabi youth would be soon unmasked. Reiterating his firm commitment to make Punjab a vibrant state (rangla Punjab) once again, Mann asked the people to repose trust and confidence in his government and assured them that their dreams would be soon realized thus cherishing their aspirations.

“Chandigarh city was created as the capital of Punjab. In all past precedents, whenever a state has been divided, the capital remains with the parent state. Punjab, therefore, has been laying its claim for complete transfer of Chandigarh to Punjab,” the resolution passed by the members said. “In the past this house has passed a number of resolutions urging Central government to transfer Chandigarh to Punjab.

“For maintaining harmony and taking the sentiments of people into account, this House again recommends to the state government to raise the matter with Central government to immediately transfer Chandigarh to Punjab.

“This house also requests the Central government to honour the principles of federalism enshrined in our Constitution and not to take any steps which may disturb the balance in the administration of Chandigarh and that of other common assets like Bhakra Beas Management Board (BBMB).”

The resolution pointed out that Punjab was reorganized through the Punjab reorganization Act, 1966, wherein, it was split into Haryana, Chandigarh and some parts were given to then Union Territory of Himachal Pradesh. Since then a balance was maintained in the administration of common assets like BBMB by way of giving management positions in some proportion to the nominees of Punjab and Haryana, it said.

“Similarly, Chandigarh administration has always been managed by the officers of Punjab and Haryana in the ratio of 60:40. However, recently the Central government has posted outside officers to Chandigarh and has introduced Central Civil Service Rules for the employees of Chandigarh Administration, which goes completely against the understanding in the past.”