On Friday, Congress said in a tweet that the proposal for 'Project Cheetah' was prepared in 2008-09. 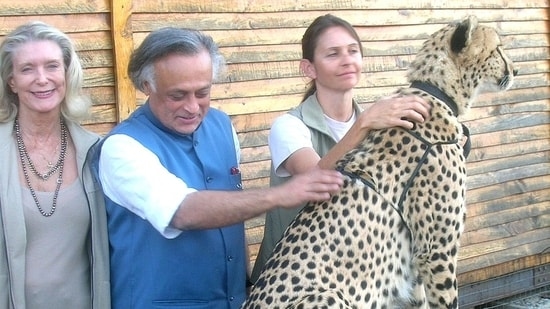 New Delhi/ Thiruvananthapuram: Congress General Secretary Communication and former environment minister Jairam Ramesh on Saturday said the Cheetah project was started under the UPA government and called the fanfare around the arrival of the Cheetah a ‘diversion from pressing national issues and Bharat Jodo Yatra ‘.

Taking on to Twitter, Ramesh said, “PM hardly ever acknowledges continuity in governance. Cheetah project going back to my visit to Capetown on 25.04.2010 is the latest example.”

He also shared a photo from his trip with a Cheetah.

“The tamasha orchestrated by PM today is unwarranted and is yet another diversion from pressing national issues and Bharat Jodo Yatra,” he said.

“When tigers were first translocated to Panna and Sariska during 2009-11, there were many prophets of doom. They were proved wrong. Similar predictions are being made on the Cheetah project. The professionals involved are first-rate and I wish the project the very best!” the Congress leader said.

On Friday, Congress said in a tweet that the proposal for ‘Project Cheetah’ was prepared in 2008-09.

“Manmohan Singh’s government gave approval to it. The then Forest and Environment Minister, Jairam Ramesh, went to Cheetah outreach center in South Africa in April 2010,” the Congress said on Friday.

A special cargo plane carrying the cheetahs all the way from Namibia to India landed at the Indian Air Force Station in Gwalior on Friday.

Cheetahs were declared extinct in India in 1952. It is a part of the government’s efforts to revitalize and diversify the country’s wildlife and habitat.