Prizes for medal winners to be increased: Manipur CM

Biren also stated that his government has initiated the process of increasing the seating capacity of the Khuman Lampak Main Stadium to around 70,000. 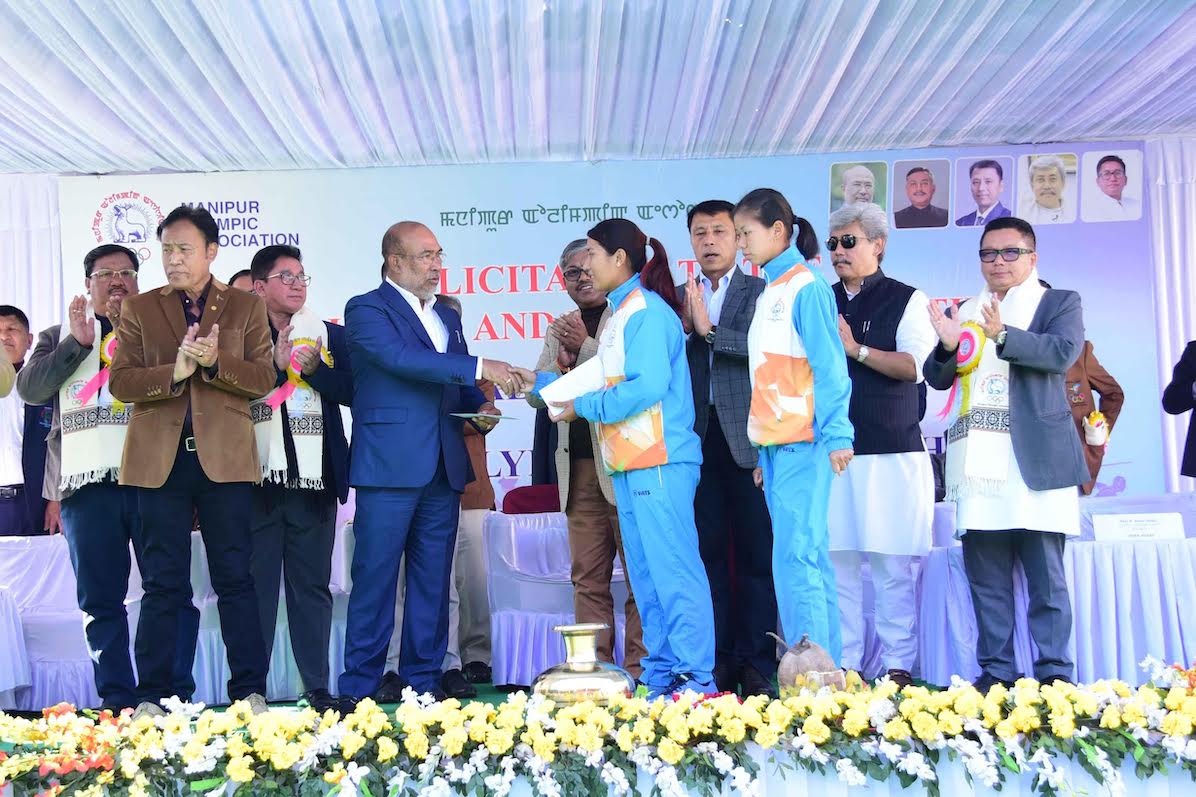 The Chief Minister announced the increase in incentives for gold medalists of the CWG from Rs. 15 lakh to Rs. 20 lakh, silver medalists from Rs. 10 lakh to Rs. 15 lakh, and participants from Rs. 4 lakh each while attending the felicitation ceremony of the medal winners and participants of the 36th National Games, 2022, in Gujarat and the 2nd North East Olympic Games, 2022, in Shillong at the Khuman Lampak Sports Complex.

Acknowledging the efforts of coaches for the achievements of players, N. Biren also announced an increase in incentives for coaches: from Rs. 5 lakhs to Rs. 7 lakhs for gold, from Rs. 3 lakh to Rs. 5 lakh for silver and for bronze from Rs. 1 lakh to Rs. 3 lakh.

He also promised that the government would take the necessary steps in consultation with the youth and affairs ministers to put the plan into action as soon as possible.

The Chief Minister said that the objective of the State Government is to create avenues for the people and support them. Stating that achievement-oriented thinking is very important for carrying out a task, he mentioned that the Government is putting in every effort to develop infrastructures of various sectors including games and sports.

He deliberated on the plan to construct a Stadium with crowd capacity of 1 lakh and mentioned the identification of land measuring 50 acres at Imphal West District for the same.

He further informed that the Manipur Olympian Park which is being developed at Sangaithel would be inaugurated soon and Union Home Minister Amit Shah had been invited to inaugurate it. He spoke on the Chief Minister’s Akhannaba Sanaroisingi Tengbang (CMAST) scheme launched for the welfare of the State’s sportsperson.

The Chief Minister urged young athletes of the State not just to aim for getting a Government Job after winning medals in National events, but rather aim for the Olympic Games. He added that the Government would also discuss matters relating to providing jobs to gold medal-winning players at the National level.

Youth Affairs and Sports (YAS) Minister Govindas Konthoujam stated that games and sports are the fields which has made Manipur known to the world.

The Minister further mentioned that the Government has been putting efforts to develop sports infrastructure so that the State’s players can avail the same facilities as players of other big states do. He stressed the need for cooperation amongst different associations related to games and sports in increasing the number of medals at national and international events.

He also spoke on the importance of selecting the right and prospective players for participating in national and international level games.

He extended his best wishes to sports players of the State in their future endeavours.

President, Manipur Olympic Association Thokchom Radheshyam MLA stressed the need of sportspersons to be passionate to win medals and added the importance of collaboration and not competition amongst different associations to achieve progress in the field of games and sports.

He lauded the achievement of young and talented athletes of the State who are trained in less infrastructure facilities.

He also spoke on the need to support our local players as we support famous footballers during the recent FIFA Football World Cup, to motivate them to bring more laurels for the State.