The 36-year-old farmer-cum-entrepreneur from a village in Ri-Bhoi district informed in detail about his agriculture and marketing activities based on organically farmed ginger and turmeric to the prime minister during a video conference along with Chief Minister Conrad Sangma. 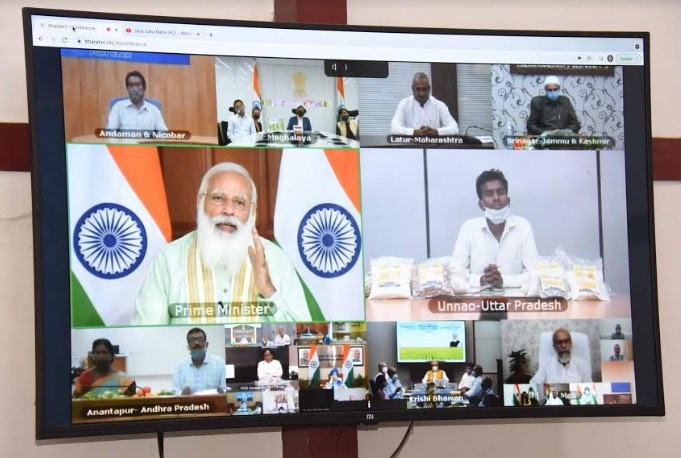 Shillong: Prime Minister Narendra Modi on Friday lauded the efforts of organic farmer Revistar Kharumnuid of Meghalaya and observed that the efforts of the agriculturist-cum- entrepreneur are an example for farmers elsewhere in the country.

The 36-year-old farmer-cum-entrepreneur from a village in Ri-Bhoi district informed in details about his agriculture and marketing activities based on organically farmed ginger and turmeric to the prime minister during a video conference along with Chief Minister Conrad Sangma.

Kharumnuid also informed the Prime Minister that he was looking forward to exporting his agricultural produce as there was good demand for organically grown ginger and turmeric in Meghalaya.

During the virtual interaction, the Prime Minister sought to know more from the farmer about how he was processing and adding value to his products, which he said would be a lesson for many youth in the country that are looking for livelihood in the agriculture sector.

The Prime Minister observed that Kharumnuid has proved as to how farmers can successfully develop business models, adding that currently 10,000 FPOs were being set up in the country and wished the young farmer the very best in his efforts.

The company run by Kharumnuid has 500 farmer members under it, covering 16 villages in Ri-Bhoi District and their focus is farming of organic ginger and other organic intercrops, Sangma informed.

“Apart from this, its products are sold in e-commerce platforms like India Mart and they also engage in widespread marketing on social media platforms,” the Chief Minister elaborated.

“Hon’ble PM was impressed with the enterprising spirit of Bah Ristar and the farmers under the FPC. Bah Ristar also expressed his gratitude to Hon’ble PM and the State Government for the benefits that the Company and farmers have received,” Sangma tweeted.

Mentioning that Prime Minister Modi on Friday sent Rs19,000 crore directly into the bank accounts of over 9.5 crore Kisan families under the PM Kisan scheme, the Chief Minister said that to further support KCC farmers in the State, the Meghalaya government has sanctioned an interest subvention of 2 percent, amounting to Rs 4.12 crore to over 26,540 farmers in 2020-21.

The Chief Minister also expressed his gratitude to the PM and the Government of India for “their commitment to the welfare of our farmers despite the challenges of COVID-19 pandemic.