"In most democratic countries, women had to undergo a long struggle to get voting rights. India has had a universal adult franchise since the beginning," she said. 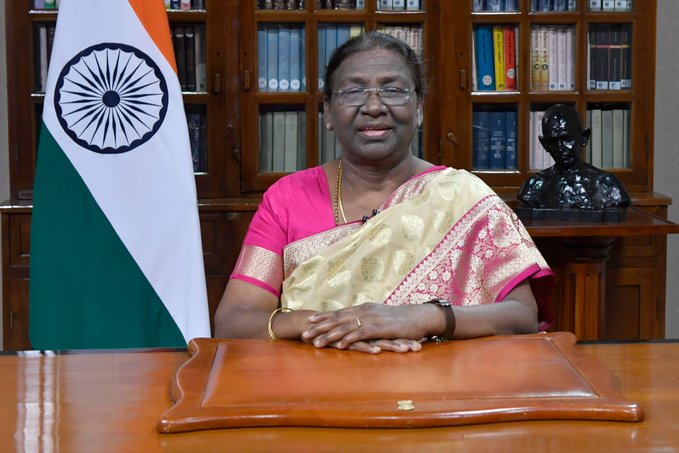 New Delhi: President Draupadi Murmu wished all Indians on the eve of 76th Independence Day, and also remembered those who suffered the brunt partition as India observed ‘Partition Horrors Remembrance Day’ on Sunday.

Murmu also paid tribute to the heroes of India’s struggle for independence, and also talked about the ‘Azadi Ka Amrit Mahotsav’ and the ‘Har Ghar Tiranga’ campaign. This is her first address to the nation ahead of Independence Day after being elected the President of India.

“It is a cause of celebration not only for all of us but also for every advocate of democracy around the world. When India won independence, there were many international leaders and experts who were sceptical about the success of democratic form of government in India,” she said.

“In most democratic countries, women had to undergo a long struggle to get voting rights. India has had a universal adult franchise since the beginning,” she said.

While wishing all citizens ahead of the Independence Day, the President also remembered those who suffered the brunt of partition in 1947, and said the day is being remembered to enhance social harmony.

“India is observing Partition Horrors Remembrance Day. The aim is to enhance social harmony, empowerment and unity,” she said.

She also talked about the aim of achieving the India that the freedom fighters dreamt of by 2047.

“By the year 2047, we will have fully realised the dreams of our freedom fighters. We will have given a concrete shape to the vision of those who, led by Babasaheb Bhimrao Ambedkar, drafted the Constitution,” she said.

President Murmu also talked about the PM Gati Shakti program and said during the last few years, unprecedented progress has been made in development of physical & digital infrastructure through it.

She also said that the keyword for India today is compassion for the downtrodden, the needy and for those on the margins. “Some of our national values have been incorporated in our Constitution as the Fundamental Duties of the citizens,” she said.

“India’s new-found confidence stems from the spirit of its youth, its farmers, and above all, its women. Gender inequalities are reducing and women are moving ahead, breaking many glass ceilings,” she added.