He said that following the self-declaration of bankruptcy, the first issue was to ensure sufficient steps to wipe out that label of bankruptcy, which meant Sri Lanka going to the International Monetary Fund (IMF). 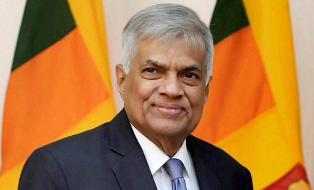 Colombo: President Ranil Wickremesinghe has described his accession to power in crisis-hit Sri Lanka as “taking over the titanic after it hit the iceberg”.

His remark was made at the 32nd Annual General Meeting of the Sri Lanka Tea Factory Owners Association in response to what Wickremesinghe described as its Chairman Lionel Herath’s “tale of woes”, the Daily FT newspaper reported.

“He (Herath) came out with a tale of woes. That is understandable looking at what we have gone through this year. Now, it is my chance to come out with my tale of woes because I have taken over the Titanic after it hit the iceberg.

“So, you can just imagine where I have to start. Everything was down. We have declared ourselves bankrupt,” the President said.

“With the bankruptcy that we have declared, our economy has virtually come to a halt. The inflation, the bankruptcy, and everything else that is happening has brought our economy to a grinding halt. How do we restart it? That is what we are engaged in,” the newspaper reported.

The President said the priority had been to conserve foreign exchange and limit imports so that the country could get fuel, fertilizer, and medicine. “It has not worked fully initially, but now it is working much better. Therefore, that is how we started.”

He said that following the self-declaration of bankruptcy, the first issue was to ensure sufficient steps to wipe out that label of bankruptcy, which meant Sri Lanka going to the International Monetary Fund (IMF).

“We had no other option. Our growth rate this year is going to be -8 percent. Last year too we recorded minus growth. This year it is also -8 percent, and next year it is forecast that it would be -3 percent,” the President was quoted as saying.

“However, when that forecast was made, everyone thought the global economy would do well. Now, all the indications are that the global economy will fare badly. How will it impact, because the rising inflation in European and other countries will mean that the cost of living will rise? This can affect exports such as less clothing, maybe less tea, and less coffee,” he said, adding Sri Lanka has to somehow manage the next two years.

The President also spoke of the need to boost Government revenue.

“Our revenue was reduced from 15 percent to 8.5 percent and we are expected to get the revenue back to 15 percent, which I think we have to do. The timeframe is 2026. I went in for a four-year program.

“I didn’t think we could bear the burden if we tried to do it in two years and it may not have been possible. I am happy that we went for four years because 2023 looks to be a bad year globally, not only for Sri Lanka,” the Daily FT quoted him as saying.

The President justified the move to raise taxes. “As someone once said, if it moves, tax it. We had to come to that level and we had no way out. I wish we could have done it gradually but couldn’t because we needed the money.

He expressed hope for an early conclusion of negotiations with Sri Lanka’s official and private creditors.

“I have already started discussions with Japan and now with India and China. We get down to a common platform of how we can resolve it while we also have discussions on bilateral issues that affect each other’s countries.”