The I-PAC team came to the state four days ago on a week-long visit for a baseline study of the perspective of Trinamool Congress and reportedly they have already interacted with influential political personalities including ruling BJP MLAs and opinion leaders in various parts of the state. 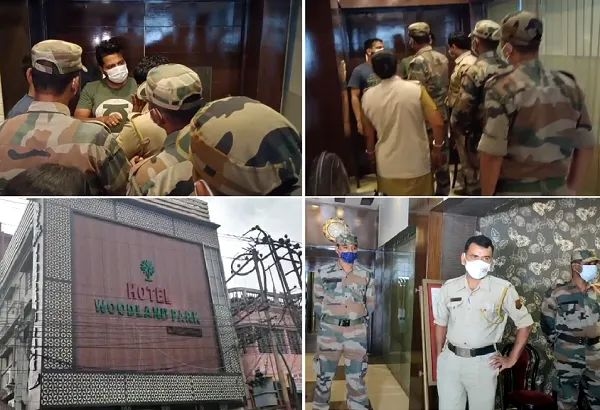 Agartala: Tripura police detained 23 members of the Indian Political Action Committee (I-PAC) of poll strategist Prashant Kishore in a city hotel since last night and stopped their movement claiming to ascertain their documents and motive of their visit, said an on-duty policeman in the hotel without further detail.

The hotel sources said suddenly police stormed the hotel around 0100 hrs and forced the staff to open their access inside. The police initially wanted to see the guest details from the hotel registered and identified the I-PAC team. Allegedly, police called a few of the team members at night to come down for interaction but they declined, hotel staff claimed.

“A large number of armed police captured the hotel lobby at night and declared that I-PAC team cannot move out of the hotel until their investigation is over. The police continued to detain us till this afternoon and informed us we can only be allowed to go to the airport. They told us none of our activities in Tripura is permitted,” said an I-PAC team member.

The I-PAC team came to the state four days ago on a week-long visit for a baseline study of the perspective of Trinamool Congress and reportedly they have already interacted with influential political personalities including ruling BJP MLAs and opinion leaders in various parts of the state.

The I-PAC has scheduled to conduct a perception study in tribal belts from today but police informally told them not to proceed, they alleged.

The incident sparked a reaction among the opposition political parties including CPI-M and Congress. Trinamool Congress state president Ashis Lal Singha condemned the incident and said, “The Chief Minister Biplab Kumar Deb has proved his political maturity by undertaking such illegal and undemocratic steps against an independent research group, which shows how BJP scared Trinamool.”

He pointed out that a dedicated team of I-PAC and Trinamool Congress would soon set up camps at the district level to fight against BJP keeping eyes on upcoming urban local bodies elections and assembly polls. A sizable number of BJP MLAs have been in touch with Trinamool congress because of vendetta politics of Tripura Chief Minister Biplab Kumar Deb who doesn’t have minimum respect to Indian democracy and political system.

Trinamool Congress would start statewide agitation against the Pegasus issue and the undemocratic attitude of the BJP government in Tripura, Singha added.