"Due to this unilateral action of the central government, there is resentment among the electricity employees," he said. 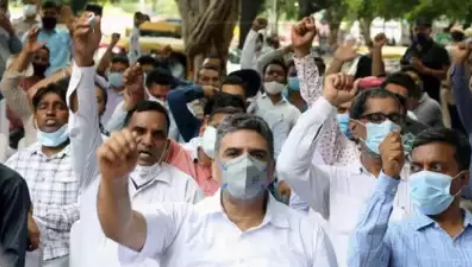 New Delhi: Protesting against the Centre’s bid to privatize the energy sector, lots of power employees Monday across the country stopped work and began an agitation against The Electricity (Amendment) Bill 2022 tabled in Parliament.

The National Coordination Committee of Electricity Employees (NCCOEE) and Engineers on Monday gave the clarion call to protest against the new legislation introduced in the lower House.

Chairman of All India Power Engineers Federation (AIPEF) Shailendra Dubey said that the power workers took to the streets after boycotting work to protest against the bill placed in Lok Sabha in an undemocratic manner with a view to complete privatization of the energy sector.

Electricity employees are demanding that the Electricity (Amendment) Bill 2022 should be withdrawn in its present form and if the government wants to bring it, then it should be referred to the Standing Committee of Parliament on Electricity Affairs so that all the stakeholders especially the common electricity consumers and power workers may get the opportunity to submit their viewpoints.

The Centre immediately after tabling the bill announced that it will be referred to a Parliamentary Standing Committee where all concerns can be discussed.

Dubey said that at 8 am in the power generation houses across the country, the electricity workers left their work and started demonstrations.

The AIPEF chairman said that the central government had written a letter to the United Kisan Morcha last year, promising that the Electricity (Amendment) Bill 2022 would not be placed in Parliament without detailed talks with the farmers and all the stakeholders.

“Due to this unilateral action of the central government, there is resentment among the electricity employees,” he said.

Dubey said that there is a provision in the Electricity (Amendment) Bill 2022 that licenses will be given to more than one distribution company in the same area. “The new distribution companies of the private sector will supply electricity using the public sector network,” he said.

He said that there is also a provision in the bill that Universal Power Supply Obligation that is the obligation to provide electricity to all categories of consumers will be only of the government company and private sector companies will earn profit by giving electricity only to profitable industrial and commercial consumers as per their wish.

According to the bill, subsidies and cross-subsidies will be abolished so that the full cost of electricity can be recovered from all categories of consumers. “If the pumping set of 7.5 horsepower is run for only six hours, farmers will have to pay a bill of Rs 10,000 to 12,000 per month. The same will be the case with the common domestic consumers as well. Thus this bill is neither in the interest of the general public nor in the interest of the employees,” Dubey said.