Poor result of ruling front in Tripura ADC: IPFT heading for a split

The party had held a central committee meeting two days ago and reviewed the election results where the leaders blamed their president N C Debbarma and general secretary Mevar Kr Jamatia for the defeat of IPFT in the election. 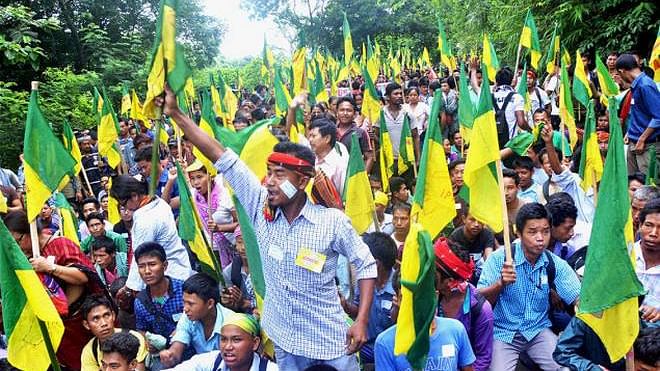 The party had held a central committee meeting two days ago and reviewed the election results where the leaders blamed their president N C Debbarma and general secretary Mevar Kr Jamatia for the defeat of IPFT in the election. Both of them despite being the head of the party have also been serving in the cabinet as Revenue Minister and Tribal Welfare Minister respectively.

According to a report most of the leaders, who attended the meeting, expressed annoyance over the role of Mr Debbarma and Mr Jamatia. They also recalled that a year after the formation of the government there was a proposal to replace the party president and general secretary from the cabinet by two young and dynamic MLAs who can raise voice for the indigenous interest in the cabinet so that the two leaders could devote more time for the organisation but the duo did not let that happen.

The leaders pointed out, “IPFT lost the ADC because of BJP and in spite of repeated demands for course correction, the top men didn’t pay any heed. IPFT forged an alliance with BJP in a condition that a special development initiative would be taken for the indigenous communities and to bring balance of development in ADC. Following pressure the central government had constituted a high power committee for socio-economic, cultural and linguistic development of tribals but no action has been taken in three years.”

The IPFT leaders met several times with union ministers and top BJP leaders seeking compliance of their alliance agreement, believing on which indigenous people voted them to power. The BJP leaders and state government sent the proposal of elevating the status of ADC to Territorial Council, special development package of Rs 8000 Cr and time bound execution of the recommendations of the committee formed for socio-economic, cultural and linguistic development of tribals, the leaders alleged.

“In the party meeting several times, the president and general secretary were advised to pressurise the cabinet to pursue with the central government for compliance of their commitment. But we have seen, both N C Debbarma and Mevar Kr Jamatia praising the Chief Minister going out of the way for their anti-people decisions, which common tribals felt IPFT has cheated them just to get into the power. They took revenge in the ADC poll for our silence on the core demand of Tipraland and adjustment with BJP,” said a senior leader and MLA of IPFT.

He further stated in next week, the party will hold another meeting to decide the future course of action and if the top leaders speak in favour of their personal gains – posts and positions, a big group decided to desert IPFT and join the royal scion Pradyot Kishore Debbarman’s party TIPRA and added, “Still both the top leaders are favouring to continue alliance with BJP and remain ministers for their personal gain, which we will not allow. If they want to keep relations sacrificing the interest of tribals, we ask them to join BJP.”

The MLA, however, criticised the statement of General Secretary and Tribal Welfare Minister Mevar Kr Jamatia who told media after the central committee meeting that the wave of royal scion was the reason behind the poor performance of IPFT in ADC elections. Such statements indicated his weakness towards BJP, which failed to comply with its promises.