'Mark my words, our land in Depsang, which is the most important land, is not going to come back under this government. The Prime Minister will not get that land back', he said. 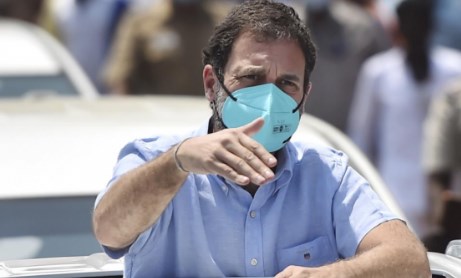 Tuticorin: Asserting that the Congress regime had always dealt with the Chinese without any hesitation, former Congress President Rahul Gandhi came down heavily on Prime Minister Narendra Modi on the Indo-China border standoff and claimed that the Chinese have occupied certain strategic areas of our country.

Inter-acting with advocates on his first event as part of his three-day electioneering in southern Tamil Nadu for the April six Assembly polls, he said before the standoff at eastern Ladakh, where the disengagement process has been completed with the withdrawal of troops, weapons and other military hardware from the North and South banks of Pangong lake areas, China “tested the idea in Dokhlam (in 2017).

“Essentially the Chinese have occupied certain strategic areas in our country. They first tested the idea in Dokhlam. They tested the idea to see how would India react and they noticed that India did not react. And then they carried out the idea again in Ladakh and also I believe in Arunachal Pradesh,” he said.

Stressing on his “hum do hamare do” jibe at the BJp-led NDA government at the Centre, Rahul, while speaking about the border standoff with China, referred to Modi’s first reactions on Chinese incursions was that ‘nobody has entered India’ while alleging that the Prime Minister was ‘scared’ of China.

Stating that since then China has negotiated on that principle, he said the Chinese knew that Modi could not stand up to them.

‘Mark my words, our land in Depsang, which is the most important land, is not going to come back under this government. The Prime Minister will not get that land back’, he said.

Modi will pretend that everything is sorted out, but India is going to lose that territory,” he claimed.

Rabhul said giving such a message to China was “very dangerous to the future because the Chinese are not going to stop with Ladakh,” he alleged.

Stating that the Congress government had “always dealt with China without any hesitation”, Rahul said the eastern neighbour had realised very well that India could not be pushed around.

‘Even in 2013 when the Chinese entered into India, we took action that forced them, forced them to compromise …we went and occupied other spaces,” he said.

“The Chinese have now understood that Modi does not have the courage as he is scared of China”, Rahul further alleged.