The Prime Minister also emphasized that the fight against corona is still on, and talked about the significance of Ayush medicines. 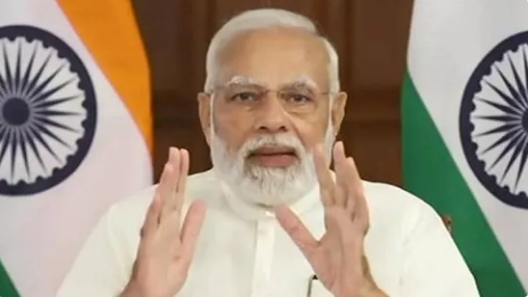 New Delhi: Prime Minister Narendra Modi on Sunday called upon people to participate in the ‘Har Ghar Tiranga’ campaign and called upon them to post the tricolor as their display pictures on social media from August 2 to 15.

Talking about Azadi ka Amrit Mahotsav, the Prime Minister mentioned the Har Ghar Tiranga movement, and said “The Tricolor connects us, inspires us to do something for the country.”

“I also have a suggestion that from the 2nd of August to the 15th of August, all of us can place the tricolor in our social media profile pictures,” he said.

The PM highlighted that August 2 is the birth anniversary of Pingali Venkaiah. India’s national flag is based on a flag designed by him.

He also remembered the great revolutionary Madam Cama. Her role in shaping the Tricolor has been very important.

PM Modi noted that the Azadi Ka Amrit Mahotsav is taking the form of a mass movement. “People from all walks of life and from every section of the society are participating in different programs connected with it,” he said.

He also said that 75 railway stations across the country, which are associated with the history of the freedom movement, have been revamped. He mentioned Gomoh Junction in Jharkhand which is now officially known as Netaji Subhas Chandra Bose Junction Gomoh, Kakori Railway Station near Lucknow, and Vanchi Maniyachchi Junction in Thoothukudi district in Tamil Nadu.

“You should also take out time to visit one such historical station in your vicinity. You will get to know in detail about pages from the history of the freedom movement that you have not been aware of,” he said.

The Prime Minister also emphasized that the fight against corona is still on, and talked about the significance of Ayush medicines.

“The whole world is still struggling today. The increasing interest of people in Holistic Healthcare has helped everyone a lot in this”.

He said there is a growing interest in Ayurveda and Indian medicine around the world and Ayush Exports have witnessed a record growth.

This was the 91st episode of PM’s radio program Mann Ki Baat which started in 2014.