He also spoke on issues like 'one rank, one pension', modern weapons and giving a befitting reply to terrorists, stating that these matters were not attended to properly by the previous regime. 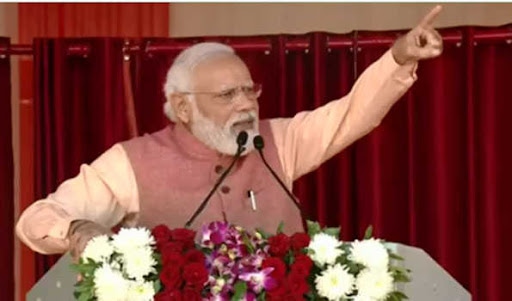 Dehradun: Prime Minister Narendra Modi on Saturday launched a scathing attack at the previous Congress-led UPA government at the Centre, accusing it of doing ‘corruption’ in the name of infrastructural development.

“After Atal Bihari Vajpayee’s government, there was one such government in the country for 10 years, which in the name of infrastructural development, only did ‘scams’. To overcome the loss caused to the country, we worked twice and are doing it even today,” Modi said, after integrating and laying foundation stone of multiple projects worth Rs 18,000 crore here.

Attacking the previous governments, the PM said, “The earlier governments did not pay attention on the development of infrastructure of border hill areas. The government, which is in place today, cannot come under the pressure of any country in the world. Our mantra is ‘nation first’.”

He also spoke on issues like ‘one rank, one pension’, modern weapons and giving a befitting reply to terrorists, stating that these matters were not attended to properly by the previous regime.

Without naming anyone, the PM accused some ‘political parties’ of pampering only one caste and one community, while discriminating with others in development policies.

He said, “We do not do ‘vote-bank’ politics, but give priority to development. This government adopted a different path, the path of ‘Sabka Saath, Sabka Vikas’ and is in the interest of the country. We want to make people ‘Aatma nirbhar’ (self reliant).

“A party whose shine is ‘diminishing’ across the country, cannot make Uttarakhand shine,” Modi said, in an apparent reference to the Congress, which has been witnessing infighting and exodus of leaders from it.

In a veiled attack on the previous government, the PM said, “Between 2007 and 14, in seven years, the earlier government built 288 km of National Highways in Uttarakhand, while in our tenure, we have built 2,000 km.”

He further said that it was the priority of the ‘double-engine ‘ government to develop Uttarakhand. Governor Gurmit Singh, Chief Minister Pushkar Singh Dhami and other dignitaries were present on the occasion.