War said 62 patients have also recovered from the viral disease took the number of recovered cases to 14, 446 in the State on Sunday. 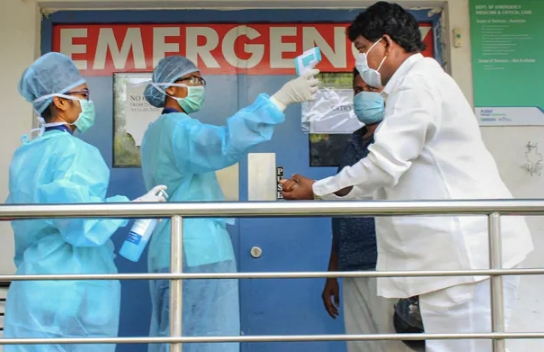 Shillong: Meghalaya on Sunday recorded 208 fresh COVID-19, the highest daily spike this year, pushing the number of active cases up to 1388 and two related deaths taking the number of fatalities to 160.

Director Health Services (MI), Aman War said two more patients, that of Saira Tynsong (54), a resident of Darrang village, on the edge of the India-Bangladesh border in West Jaintia Hills District died in Civil Hospital, Shillong due to COVID-19 infection with Type I respiratory failure.

Another 45-year-old woman Purnima Lama, who was suffering from other ailments died due to ARDS COVID-19 Pneumonia with Type 2 Diabetes Mellitus in Bethany hospital, Shillong, he said.

War said 62 patients have also recovered from the viral disease took the number of recovered cases to 14, 446 in the State on Sunday.

With 1008 active COVID-19 cases, East Khasi Hills, which includes State capital Shillong is the most affected district, followed by Ri-Bhoi with 131 active cases and West Jaintia Hills with 122 active cases as of date.

Meanwhile, most of the tourist destinations in and around the State capital have been shut down due to the rapid rise in Covid-19 cases, even as all the district authorities have intensified their efforts to enhance the vaccination campaign against viral infection throughout the State.

Entry of tourists from outside into the State has been halted since Friday last, with cases of Covid-19 infection mounting in other parts of the country as well as in Meghalaya.

The streets of the capital city were deserted on Sunday as most of the vehicles were off the roads and very few people ventured out.

Meanwhile, in partial modification to order under Section 144 CrPC issued on April 16, which prohibited the opening of shops and establishments, roadside markets and roadside vendors, both in fixed premises or otherwise, in Shillong Urban Agglomeration on Sundays, till further orders, and also to order issued on April 22, in which shops and vendors as per list contained therein shall remain closed from April 26 to May 2in Shillong Urban