One lakh Pengba fishlings released into Loktak lake, 1 core by May end

Addressing the formal function, the Chief Minister appreciated the concerted efforts and schemes of the ICAR-CIFRI, Barrackpore taken up in collaboration with local fishermen and the department in trying to protect and revive the indigenous fish varieties of the State. 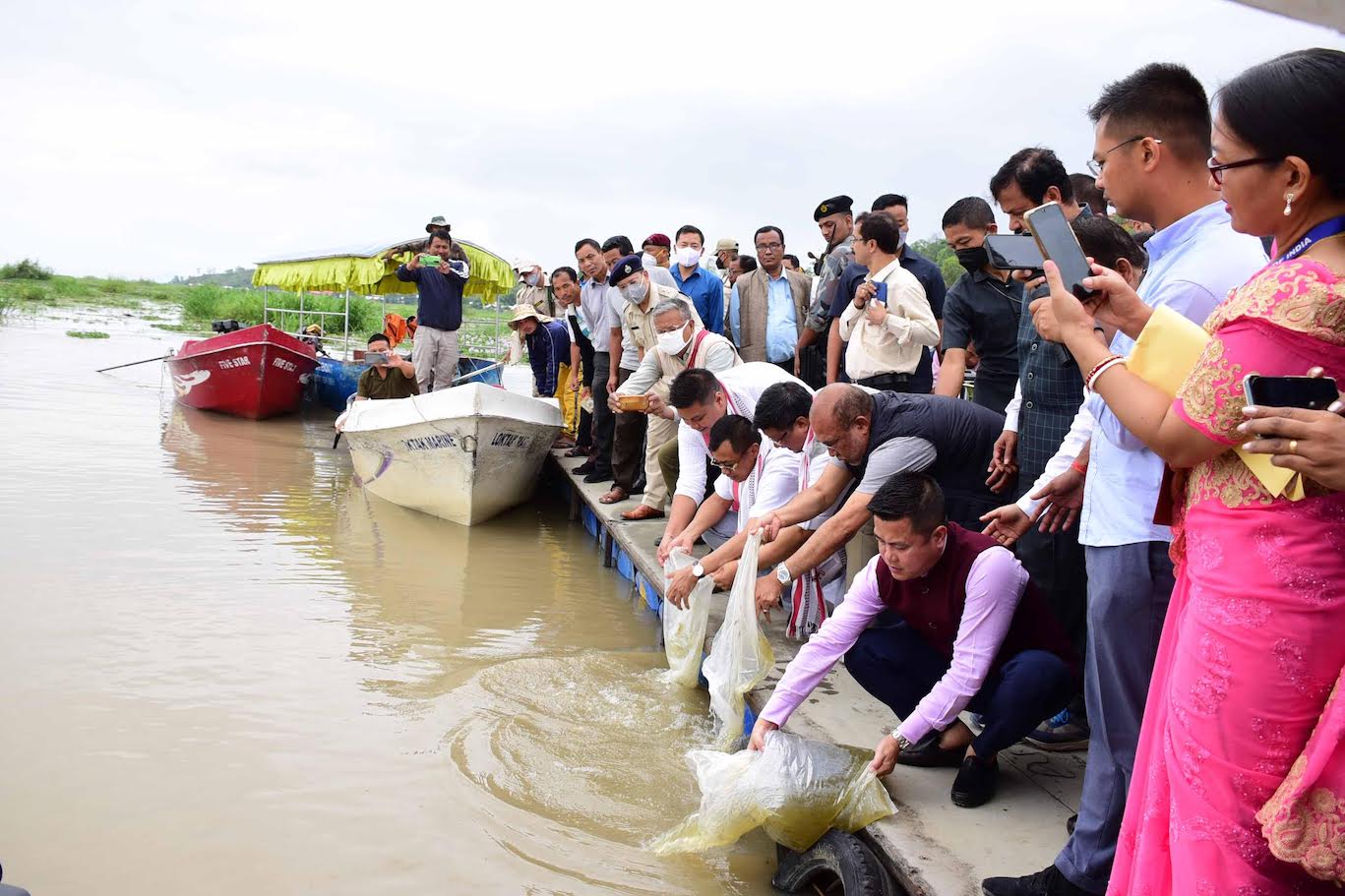 Addressing the formal function, the Chief Minister appreciated the concerted efforts and schemes of the ICAR-CIFRI, Barrackpore taken up in collaboration with local fishermen and the department in trying to protect and revive the indigenous fish varieties of the State.

Out of 54 indigenous fish varieties in the State, we have now only 35 varieties in existence, he said, expressing concern over the environmental hazard caused by human negligence. He expressed strong disapproval of the habit of dumping garbage into our rivers which in turn fall into Loktak Lake and making it hard for the fish and other organisms to survive.

Now is not the time for speeches, it is the time to act, the Chief Minister said stressing on the importance of acting on the government’s promises and assurances. Sometimes, we seem to forget that there is a democratically elected government formed with the mandate of the people, he said, highlighting obstructions to developmental projects from some quarters. He said that the present government was formed with the full mandate of the people, and further appealed to the people against obstructing developmental schemes.

Explaining the story behind implementation of the Loktak Livelihood Mission in 2018, the Chief Minister said that during his air travels, he noticed a vast tract of swampy area around Loktak Lake lying idle. This gave him an idea to utilize the area for rearing fish by means of pen culture after clearing the phumdis which in turn will be turned into organic fertilizer, he said.

The Chief Minister also said that altogether Rs. 15 crore has already been sanctioned for developmental works for the peripheral area of Loktak Lake and only about Rs. 2.5 crore have been utilized so far.

Highlighting that the shortage of fish production in the State is due to lack of releasing fish in the lake, the Chief Minister said today we are releasing one lakh fishlings, and aim to release around one crore during the month of May. He also made an earnest appeal to the fish farmers to create awareness among the public as well as stop catching fishlings.    The Chief Minister also appealed to the fish farmers against using electric current to catch fish.

CM Biren Singh also spoke strongly against encroachment on forest land and Loktak Lake. Stating that out of 12,344 pattadars around the lake, 379 illegal encroachers were found, he said adding that after the Loktak Protection Act was implemented in 2006, no new patta could be issued. He reiterated that stringent actions will be taken up against all encroachers and concerned government officials who were involved in issuing illegal pattas.

The Chief Minister also warned against illegal drug business and illegal poppy plantations. Calling upon all to preserve and save Loktak Lake, the Chief Minister said that Manipur’s own existence rests on the existence of Loktak Lake and Koubru range. So it is very important to safeguard Loktak Lake and Koubru Range, he said. He further stressed on the importance of safeguarding our forest cover and added that with conviction and commitment we have to meet all challenges for our future generation.

Earlier, around Rs. 400 crore were utilized for importing fish into the State annually; however, in the past 4-5 years, we have managed to bring this down to around Rs. 300 crore.

The Chief Minister said that the government needs the support of the people. We need support and sincerity from the public, government as well as officials to bring development, he added. Shri N. Biren Singh further assured that any developmental project to be implemented in and around Loktak Lake will be taken up by properly maintaining the ecological balance as well as with proper consideration of the local public. And at the same time the people should ensure that the ecological balance of the Lake is properly maintained and that there is no illegal encroachment in the area, he said.

Reiterating that the government will not work against the law, the Chief Minister further appealed to all to support surveys of the Revenue department and LDA.

Director (Fisheries), Government of Manipur, H. Balkrisna Singh stated that due to overfishing in the Loktak lake, the population of fishes are depleting and to supplement the depleting population and as Pengba is declared the State Fish of Manipur, one lakh fishlings are being released into the lake today.

The programme was organised by ICAR-Central Inland Fisheries Research Institute, Barrackpore in collaboration with the Department of Fisheries, Government of Manipur and Loktak Development Authority, Manipur.