During the search, three Leopard Skin and other incriminating materials were recovered from their possession. 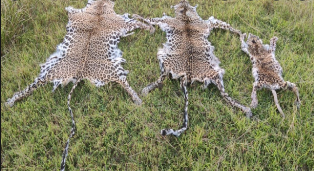 Bhubaneswar: A team of the Special Task Force (STF) of the Odisha Police Crime Branch has arrested three wildlife criminals and seized three leopard skins\\\\ and other incriminating materials from their possession, sources said on Sunday.

The STF sources here said that based on information, one of their teams, with the help of Jharsuguda and Sambalpur district police, on Friday raided the Malidhi Chhaka area under Kolabira police station and Palsamal village under Jujumara police station, and arrested the criminals. While Malidhi Chhaka is part of the Jharsuguda district, Palsamal falls under the Sambalpur district.

During the search, three Leopard Skin and other incriminating materials were recovered from their possession.

All three accused persons have been arrested and are being forwarded to the court of Sub-Divisional Judicial Magistrate, Jharsuguda.

In this connection, a case was registered on Saturday under the Wild Life (Protection) Act, 1972.