The SRC said the state government is fully prepared to counter any eventuality and requested people not to be panicked and resort to panic buying. 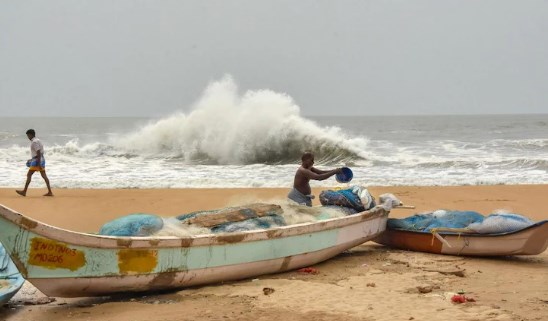 Bhubaneswar: The Odisha government today alerted the Collectors and Superintendents of Police of all the ten coastal districts for a possible cyclonic storm likely to hit the Odisha- West Bengal coast on May 26 next.

Special Relief Commissioner P K Jena said although no clear picture has emerged about the direction, speed and the place of the landfall of the cyclonic storm, the collectors and SPs of all the coastal districts have been alerted.

He said on the direction of Chief Minister Naveen Patnaik discussion had been held with NDRF, ODRAF, Fire service personnel about pre cyclonic deployment of manpower and equipment.

Discussions were also held with the various Department Secretaries, District collectors, Emergency Officers, Fire service officers of the ten Coastal districts.The officers were directed to make preparation to counter the possible cyclone and they have also started preparation.

The SRC said the state government is fully prepared to counter any eventuality and requested people not to be panicked and resort to panic buying.

.Jena also urged the the media to file report with responsibility on the basis of the information provided by IMD and not to create panic and confusion among people quoting some other sources on the cyclonic storm.

The SRC said the Panchayati raj department and Energy Department were asked to make preparations to ensure supply of drinking water and electricity supply. The Fisheries and Animal Resources department was asked to launch a public awareness campaign asking the fishermen who are in deep sea to return to the coast and motivate the fishermen not to venture into the sea.

IMD sources said a low pressure area is very likely to be formed over North Andaman sea and adjoining East Central Bay of Bengal around May 22.

It is likely to intensify further into a cyclonic storm by May 24 next , move north westward and reach near Odisha-West Bengal coast around May 26 morning.

Under its impact Light to moderate rainfall at most places with heavy falls at isolated places is very likely to commence from May 25 over coastal districts of Odisha with significant increase in intensity and also spatial extension subsequently.

Squally wind speed reaching 45–55 kmph gusting to 65 kmph is likely to prevail over Andaman Sea & adjoining east central Bay of Bengal on May.23.

It is very likely to increase to 50–60 kmph gusting to 70 kmph from May 23 and further becoming Gale wind speed 65 to 75 gusting to 85 kmph from May 24 over major parts of central Bay of Bengal and would increase gradually till May 25, 2021.

Squally wind speed reaching 40-50 gusting 60kmph is very likely to prevail over North Bay of Bengal and along and off Odisha – West Bengal coasts from evening of May 25 and would increase gradually till May 26, 2021.

During the period Sea conditions will be rough to very rough over Andaman Sea & adjoining east central Bay of Bengal from May 23.

The fishermen are advised not to venture into the deep sea area of central Bay of Bengal from May 23 to 25 and into north Bay of Bengal along & off Odisha coast from May 24 to 27.

The Fishermen, who are out in the Deep Sea are advised to return to the coast by May 23 next.