The second session belonged to the visitors, making it a see-saw day so far. The wicket of Shubnam Gill (52) set the tone and the Black Caps got the hold on the Indian batting. 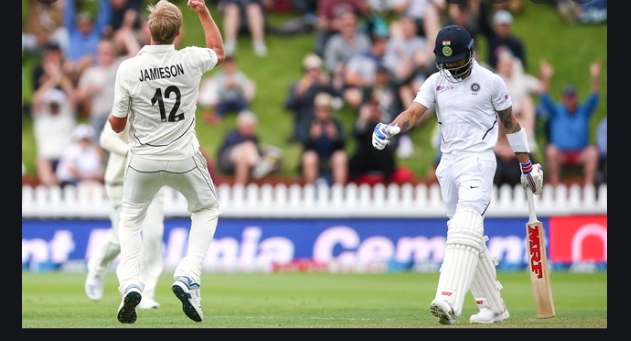 Kanpur: India is 154 for 4 at Tea on Day 1 of the first Test against New Zealand at Green Park here on Thursday.

Debutant Shreyas Iyer and bowling all-rounder Ravindra Jadeja are batting on 17 and 6, respectively.

The second session belonged to the visitors, making it a see-saw day so far. The wicket of Shubnam Gill (52) set the tone and the Black Caps got the hold on the Indian batting.

Both Ajinkya Rahane (35) and Cheteshwar Pujara (26) got good starts, but it was the Indian captain who looked in good touch, but neither kicked on.

Debutant Shreyas began in a nervy fashion. He got away with an audacious shot to get off the mark on debut but managed to settle down ever since.

Shreyas also survived a review close to tea. He got hit on the back pad playing inside the line to William Somerville and looked at a very close call, but the ball-tracker kept the impact on the umpire’s call.

Both Shreyas and Jadeja have a huge task at hand if they are to take the hosts to a good total.

New Zealand bowlers were disciplined and used the surface well, but an injury to Tim Southee will be a concern. He walked off midway through an over and has not returned.

The visitors fought back through their pacers after the morning session went India’s way. Southee and Kayle Jamieson both were very impressive and saw them reverse swinging.

Jamieson took 3 for 38 and Southee 1 for 30. Southee had put Rahane under pressure with some reverse swing. Captain Kane Williamson took an optimistic review, but the Indian captain was well outside off while on 13.

Resuming the innings after lunch, New Zealand got three big wickets and left India in a spot of bother at 145 for 4. In the very first, Jamieson struck as he exploited the low bounce and done in Shubnam to a fuller ball that got a big inside edge onto his stumps.
Southee then got Pujara in a familiar type of dismissal. He drew the Indian vice-captain to hang his bat outside off that went low behind the stumps to Tom Blundell.

Jamieson got his third as Rahane chopped one onto his stumps. He had survived a caught behind appeal on review in just the previous ball.

Earlier, Shubnam ‘s unbeaten 52 helped India reach 82 for 1 at lunch with Pujara batting on 15. They had stitched an unbeaten partnership of 61 for the second wicket.

New Zealand had an exceptional start until the first drinks break. They could have had two wickets had they appealed for that LBW from Ajaz Patel to Shabnam, but had the wicket of Mayank Agarwal (13) and been relentless.

In the 16th, he flicked Tim Southe nicely past square leg. And then, the Delhi lad used his feet against Ajaz over and smacked the ball nicely with a straight bat without worrying about the mid-on fielder for six in the 17th over. In the same over, he stayed leg side and gave room to slice the ball past backward point.

Just before lunch, Shubman got to his 4th Test fifty after he flicked William Sommerville wide of the fielder to the deep for a single.

All three bowlers that Captain Kane Williamson used kept the handbrake on any scoring notions, and there were very few bad balls.
New Zealand seamers extracted movement with the new ball, especially Kayle Jamieson. There also were early signs of spin and uneven bounce.

Just six overs and Williamson decided to employ left-arm orthodox Ajaz. Straight away he got the turn from a good length as the ball caught the shoulder of Shubnam’s blade and fell short of slip.

Ajaz again made a stifled LBW shout, but Shubnam came a long way down and HawkEye showed three reds. New Zealand missed out and could see why they did not review this though.

Jamieson bowled a top-class opening spell and got a well-deserved wicket. Mayank poked outside off and got a thick edge through to keeper Tom Blundell.