A breakdown of the list shows Mexico with seven journalists killed, Afghanistan with six killed, Yemen and India with four killed in each 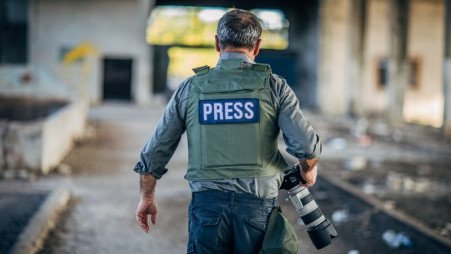 Paris: Reporters Without Borders (RSF) said on Thursday that the number of jailed journalists around the world increased by 20 per cent in 2021 to 488 compared to the previous year, marking the highest number the NGO has recorded since it published its first annual report in 1995.

“RSF logged a total of 488 journalists and media workers in prison in mid-December 2021, or 20 per cent more than at the same time last year,” the press statement accompanying the publication said.

According to RSF Secretary General and Director General Christophe Deloire, the global rise in arbitrary detention can be attributed, above all, to developments in three countries — Myanmar following a February 1, 2021 military coup, Belarus after the disputed reelection of president Alexander Lukashenko in August of 2020, and China while tightening its control of Hong Kong.

The statement also said that 65 per cent of the journalists killed in 2021 were deliberately targeted and eliminated, with the number falling to 46, the lowest in 20 years. A breakdown of the list shows Mexico with seven journalists killed, Afghanistan with six killed, Yemen and India with four killed in each. Mexico topped the list of the deadliest countries for journalists, according to the statement.

Since 1995, RSF has drawn up annual reports of violations against journalists based on data gathered from January 1 to December 1 of a given year.