The Chief Minister appealed to other communities to come up and stand together against the plantation of poppy cultivation. 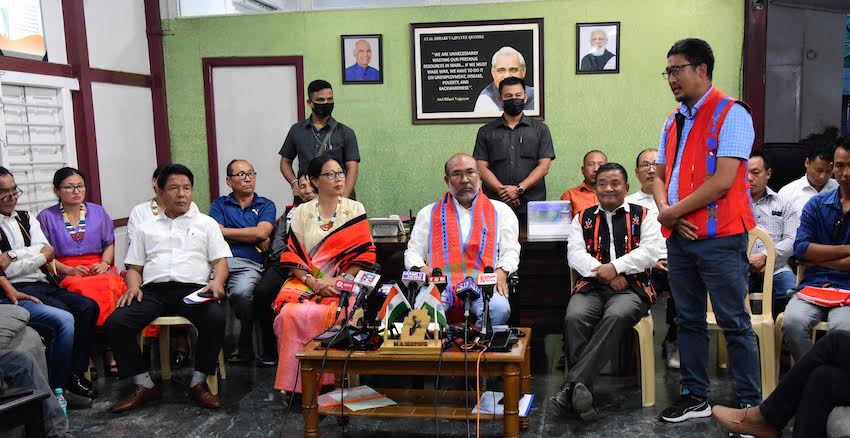 Appreciating the delegation team for their unconditional support and bold commitment to the War on Drugs Campaign, N. Biren Singh expressed his hopefulness for successfully preserving the environment which had been degraded for a long time due to large scale poppy cultivation. He continued that Tangkhuls had been taking a major role in development of the State since time immemorial.

Stating that the expression of the delegation showed their seriousness in their commitment to fully eradicate poppy cultivation, the Chief Minister appealed to other communities to come up and stand together against the plantation of poppy cultivation.

He further warned drug sellers and traffickers to stop their activities and added that the State police had always been vigilant to track and arrest drug sellers. Any untoward incident happened on the action of police would be a loss for all, he added. He maintained that the Government would ensure maximum punishment for those involved in drug trafficking and selling.

N. Biren informed that two committees led by IAS officers  including one each for Ukhrul District and Kamjong District had been formed to provide support in the people’s stand against poppy cultivation.

Convener, CSOs Committee on Stopping Opium Poppy Cultivation and TSL President Thingreiphi Lungharwoshi stated a Joint Forum including Civil Society Organisations, Faith Based Organisations, NGOs, Media Fraternity and Social Activist held a serious consultation at TNL Hall, Ukhrul on 5th of this month and took pledge to reaffirm position and commitment to extend full support to the State Government’s War on Drugs Campaign and to curb the plantation of poppy.

She continued that the Joint forum had also appealed to the farmers of Ukhrul District not to opt for poppy cultivation and cautioned that rule of law would be applied against violators.

The delegation lauded the earnest efforts of the Government to curb poppy plantation in the State. The team put forward a proposal to the Chief Minister which includes engaging agriculture oriented departments to identify most suitable area specific crops/ fruits as alternatives to poppy plantation and providing awareness on the ill effects of poppy plantation and use of drugs among others.

It may be mentioned that earlier the Poumai Naga Union had also submitted a resolution to the Chief Minister declaring Poumai areas as drug free zones and their commitment to stand strongly against poppy plantation.