Prior to this knock, Kohli's prolonged bad run was an issue and some cricket experts started to question his spot in India's T20 squad. 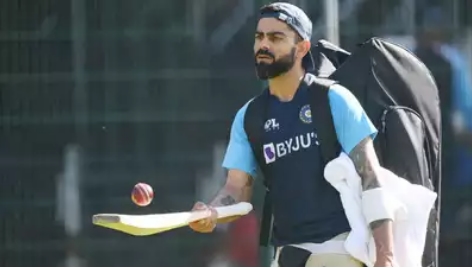 Prior to this knock, Kohli’s prolonged bad run was an issue and some cricket experts started to question his spot in India’s T20 squad.

India’s legendary 1983 World Cup winning captain Kapil Dev went to an extent of saying that “if a bowler like Ravichandran Ashwin’s calibre can get dropped, even Kohli should be dropped from the squad due to his inconsistent form.”

Former wicket-keeper batsman Kamran Akmal tweeted, “Form is temporary…Class is permanent. Always love watching @imVkohli playing..what a brilliant you are a real king.” Hasan Ali, who is part of Pakistan’s Asia Cup team, had this one-liner, “The great is back @imVkohli.”

Pakistan’s bowling-allrounder Imad Wasim called Kohli the world’s best player. “The best player on the planet is back @imVkohli #GOAT,” he said.

Kohli on Thursday dedicated his maiden T20 ton to his wife Anushka Sharma and daughter Vamika.

“As I said, since I came back into the team, the team has been open, welcoming, helpful, and given me space to work on my game. I know there was a lot of stuff going on on the outside but they really kept my perspective right and I kissed my ring in the celebrations as well, you see me standing like this right now and all the things being put in perspective have been done by one person, who stood by me through all these difficult times that is Anushka. This hundred is specially dedicated to her and our little daughter Vamika as well,” he told Star Sports at the innings break.

This century was special as it came off his blades after a hiatus of three years and it came in just 61 balls after smashing 12 boundaries and 6 sixes, The knock helped India set up a massive target of 213 runs which resulted in India winning by 101 runs against Afghanistan with the help of Bhuvaneshwar Kumar’s 5/4 performance.

“When you have someone next to you, having conversations, putting the things in the right perspective as I have been and Anushka has been by my side through these times, time away from the game has taught me a lot of things,” he said.

Kohli said the last two and half years taught him a lot which made him put a lot of things into perspective, and he was a bit shocked as he least expected to crack a century in the T20 version.

“I was a bit shocked as this was the format I least expected for a century to come anytime soon. It is all God’s blessing, I have been working hard and this was just a moment that was very special for me and the team as well. It was an accumulation of a lot of things (on what was going on his mind when he reached the hundred),” he said.

Kohli also thanked God Almighty for what he has achieved before hitting a bad patch in his career and was not desperate on his return. “When I came back I wasn’t desperate, I was grateful for what God blessed me with, people were talking about me not getting a hundred but I looked at how much he has given me already. That really calmed me down and relaxed me,” he said.

Kohli said the six weeks off made him understand the mental and physical tiredness, and on his return to the nets, he realized that his old rhythm was coming back and it was time for performing in the middle.

“I was just happy to come back, six weeks off, I was refreshed, I understood how tired I was mentally and physically, your competitiveness does not allow you to take that call and I wanted to be the best version of myself for the team. When I came here, when I started playing in the nets, I felt like my old rhythm was coming back and it was about getting those performances in the middle,” he said.