NorthEast United now have 13 points from 18 matches. SC East Bengal dropped to the bottom of the heap, having just 10 points from 17 outings. Bengaluru, meanwhile, endured a second straight defeat, remaining at sixth place with 23 points from 17 games. 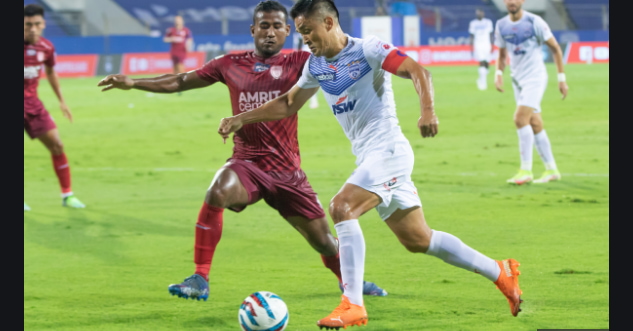 Fatorda: Bengaluru FC’s top-four aspirations were dealt a blow as NorthEast United FC came from behind to win 2-1 in the Indian Super League (ISL) at the PJN Stadium here on Friday. Cleiton Silva gave Bengaluru the lead in the 66th minute after a barren first half, but two goals in the space of six minutes from Deshorn Brown (74th) and Laldanmawia Ralte (80th) allowed Khalid Jamil’s team to snap a 10-game winless run and move up a rung from the foot of the points table.

NorthEast United now have 13 points from 18 matches. SC East Bengal dropped to the bottom of the heap, having just 10 points from 17 outings. Bengaluru, meanwhile, endured a second straight defeat, remaining at sixth place with 23 points from 17 games. It will now be harder for Marco Pezzaiuoli’s charges with only three games remaining and teams above them having more games in hand. NorthEast United got the first real chance of the game when Imran Khan headed a Joe Zoherliana cross wide. One minute later, Deshorn Brown hit the crossbar after Suhair Vadakkepeedika set him up with a brilliant ball as the Highlanders kept Bengaluru backline on tenterhooks.

Bengaluru took time to warm up to the contest, Sunil Chhetri making runs down the left channel to try and find the likes of Cleiton Silva. But the better chances kept falling to NorthEast United as Hernan Santana forced Lara Sharma into a great save just before the cooling break. At halftime, both teams were locked goalless although Bengaluru looked the better side enjoying more ball possession but lacking teeth upfront. NorthEast United had the better opportunities in goal but failed to make the most of it.

Sharma was called into action early on in the second half and he did well to keep Suhair’s effort at bay while at the other end Mirshad Michu saved well from Chhetri who ran at the NorthEast United defence with venom and played a one-two with Udanta Singh before taking a swipe at goal but Michu narrowed the angle down in time and got his right leg in the way. The deadlock was finally broken and Silva was at the right place at the right time, slotting home a Danish Farooq cross by outwitting Zakaria Diallo.

But the Blues’ joy was short-lived as Brown got on the scoresheet, Zoherliana whipping in a cross for Brown to leap over Yaya Banana and nod past Sharma and into the goal. NorthEast United added to their tally and made a remarkable comeback minutes later, Marcelinho doing all the spadework to escape a few Bengaluru shirts and put the ball on a plate for Laldanmawia Ralte who tapped home with ease. It was heartbreak for Bengaluru as they tried hard to wrest back the advantage but in the end, NorthEast United prevailed.