Netaji, his ideas were sadly ignored after Independence: PM

He said that Kingsway or Rajpath, a symbol of slavery, has now been consigned to history. 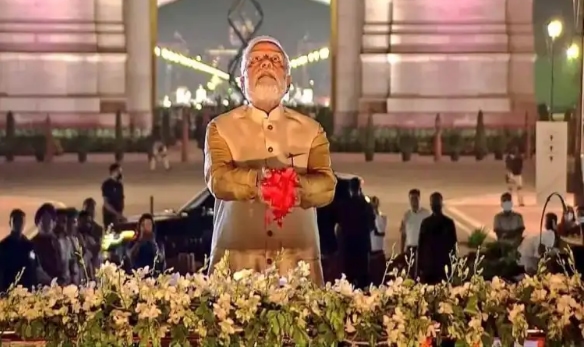 New Delhi: Netaji Subhash Chandra Bose was forgotten and his ideas and even symbols were unfortunately ignored after India’s Independence, Prime Minister Narendra Modi said on Thursday, adding if the country had followed Bose’s path, it would have achieved great heights today.

The Prime Minister was speaking after unveiling a 28-feet grand statue of Subhas Chandra Bose near India Gate and inaugurating ‘Kartavya Path’, the stretch between Rashtrapati Bhavan to India Gate earlier known as Rajpath.

“If the country had followed Subhash Babu’s path after independence, it would have achieved great heights today. But unfortunately, after independence, this great hero was forgotten and his ideas and even symbols were ignored,” the Prime Minister said.

He said that Kingsway or Rajpath, a symbol of slavery, has now been consigned to history.

“From today onwards, the symbol slavery Kingsway means Rajpath has become a thing of the past and erased forever. Today, a new history is made in the form of the Kartavya Path. Today, a huge statue of our national hero Netaji Subhash Chandra Bose has also been installed near India Gate. At the time of slavery, there was a statue of the representative of the British monarchy,” he said.

The Prime Minister said that the installation of Netaji’s statue at the same place is doing ‘Pran Pratishtha of a modern and strong India.

“By erecting the statue of Netaji today we have truly started the journey of replacing all colonial influences in India. This statue is here in a place where earlier the statue of a British king existed,” he said.

He said that if the mark of George V’s statue has been removed and Netaji’s statue has been installed, then it is not the first example of the abandonment of slavery. This is a continuous Sankalp (Resolution) Yatra till freedom from slavish mentality is achieved, he added.

Modi said that the government took many decisions in the last 8 years which have imprinted Netaji’s ideals and dreams. He cited several decisions including the repeal of outdated laws saying that the changes are not limited to symbols but are now part of government policies.

The Prime Minister also thanked the construction workers involved in the Kartavya Path project and invited them with their families to be his special guests on January 26.

The Prime Minister urged citizens to come to Kartavya Path, watch a drone show on Netaji’s life and upload photos of themselves on social media.

The grand statue of Netaji has been carved from a monolithic block of granite weighing 280 MT. After 26,000 man-hours of intense artistic endeavor, the granite monolith was chiseled to produce a statue weighing 65 MT, the Ministry of Culture earlier said.

The statue is completely hand sculpted using traditional techniques and modern tools. The team of sculptors for executing the statue was led by Arun Yogiraj.

The 28-feet tall towering statue of Netaji is one of the tallest, most realistic, monolithic, handmade sculptures in India.

The Prime Minister had on January 21 assured that a grand statue of Netaji made of granite will be installed at India Gate as a symbol of the nation’s indebtedness to him.

A 100 feet-long truck with 140 wheels was specially designed for this monolithic granite stone to travel the 1665 km from Khammam in Telangana to New Delhi.

The unveiling of the statue of Netaji was accompanied by a cultural program showcasing India’s classical heritage.

A special 10-minute Drone Show on Netaji’s life would be projected at India Gate at 08.00 PM on all three days.

Both the cultural festival and the drone show would be open to the public with free entry.