Neeraj Doneria became the national convener of the Bajrang Dal

Neeraj Doneria was given this responsibility in the Central Working Committee meeting of Vishwa Hindu Parishad held in Chennai recently. 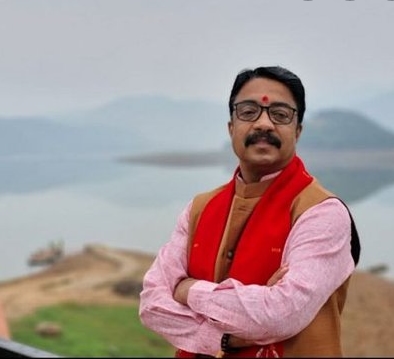 Hamirpur (HP): Neeraj Dauneria who had worked as the organizing secretary of the VHP in Himachal Pradesh earlier has been appointed as the National convener of the Bajrang Dal.

Over the years, Neeraj Doneria, who has been in the service of the organization in the Rashtriya Swayamsevak Sangh and Vishwa Hindu Parishad, has been given this important responsibility by the organization.

Neeraj Doneria was given this responsibility in the Central Working Committee meeting of Vishwa Hindu Parishad held in Chennai recently.

Meanwhile, by making Neeraj Doneria the national convener, there is a wave of happiness among the volunteers and the workers of Vishwa Hindu Parishad across the country in general and Himachal Pradesh in particular.

Various leaders of the Himachal Pradesh VHP have sent congratulations to Neeraj Doneria for getting the top post in the Bajrang Dal and have expressed hope that the organization would flourish further under his leadership.

Neeraj Doneria originally hails from Agra, Uttar Pradesh, and has previously been the organization secretary of the Vishwa Hindu Parishad of Himachal Pradesh. After successfully completing a long tenure of 4 years in Himachal, he was appointed as the national co-convener of Bajrang Dal in the month of February.