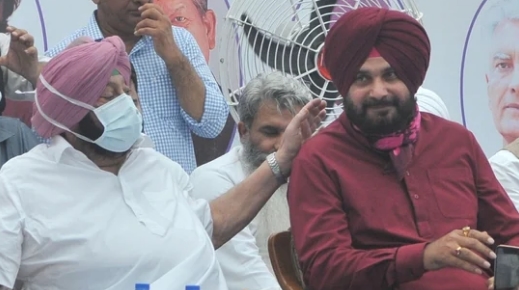 After assuming the charge, Amritsar (East) MLA Navjot Sidhu, in a passionate speech, said, “The post does not matter to me. I have left many posts but the issue is Punjab’s agriculture, the demands of the people who have come on the streets. The farmer is wandering on the streets of Delhi.”

“There is no difference between an ordinary party worker and the state unit chief. Every Congress worker in Punjab has become the chief of the party’s state unit from today,” he said.

While blessing the new PPCC team, Chief Minister Capt Amarinder Singh said that the big responsibility that the high command has entrusted on the shoulders of the new generation will be fulfilled together.

He said that the Congress is completely united and will move towards victory in the next assembly elections by maintaining harmony between the government and the organization. “Together we all have to save the country and the state from the anti-state forces. I have no faith in Shiromani Akali Dal and Aam Aadmi Party at all. The state has to be saved from them,” he said.

While congratulating the new PPCC chief, Capt Amarinder said, “Mr Sidhu will get his full support. Earlier, outgoing PPCC chief Sunil Jakhar and I worked together for four years. Our government did a good job during the Corona period.”

The Chief Minister said that as far as sacrilege case is concerned, he will only say that these works take time. The accused will not be spared.

Recounting his family’s long association with Sidhu’s father, he said, “it was Sidhu’s father who had brought him into politics. Now both of us will enter the election field together. We have to think about not only Punjab but the whole country. We share a border with Pakistan. We have a dual responsibility. Governments keep coming and going but the party will always be there.”

Congratulating the new team, Punjab affairs in-charge Harish Rawat praised the Chief Minister and said that the lion never grows old and the support of an experienced and capable Chief Minister like Capt Amarinder Singh will take the new team to the heights. Be it the farmers’ fight or the issue of national security, Capt Amarinder Singh has served his responsibility on every front.

While handing over the new responsibility to Mr Sidhu, outgoing PPCC chief Sunil Jakhar congratulated him and said that Capt Amarinder Singh did a lot for the party in 20 years but red-tapism damaged the morale of Congress workers. He told Sidhu that it was an “unfinished” agenda for him.

He thanked the Chief Minister for coming to the function. The high command has placed great responsibility on the shoulders of Mr Sidhu and everyone has to cooperate with him, he said.

Earlier in the day, Sidhu met Chief Minister Capt Amarinder Singh at the Punjab Bhawan here and greeted him.

Speaking to media outside the Punjab Bhawan, Congress MLA Pargat Singh said Sidhu met the Chief Minister over tea and the meeting between them was cordial.