About 130 km south of Kolkata, Nandigram has already proved its importance, vitality and political sensitiveness among the agrarian people, whose resistance against forcibly land acquisition for an economic zone by the Leftists in 2007, finally led to the exit the CPI(M) led 34 years government in 2011 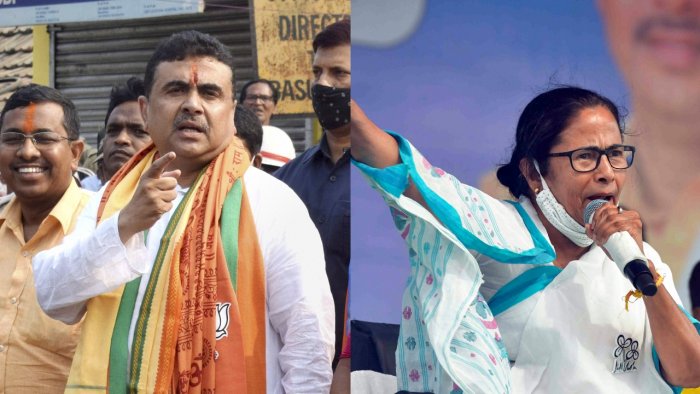 Nandigram: An eerie silence prevailed on the eve of poll across Nandigram as the battle for the hot seat, the focal point in West Bengal 2021 assembly elections, will prove to be a Waterloo between chief minister Mamata Banerjee and her challenger and BJP candidate Suvendu Adhikari, because the voters will have to pick one of the two giants and dump one.

About 130 km south of Kolkata, Nandigram has already proved its importance, vitality and political sensitiveness among the agrarian people, whose resistance against forcibly land acquisition for an economic zone by the Leftists in 2007, finally led to the exit the CPI(M) led 34 years government in 2011

Many of her ardent followers took this decision as maybe a political gamble for a giant politician, who has been winning each and every election since 1984. Before any second thought of her decision, her former aid turned fierce political foe Suvendu Adhikahri took the challenge and convinced his BJP central leaders to put him as party nominee from his old constituency. Suvendu also dared Mamata Banerjee to stick to her decision and face the electorate.

Fifty-year-old Suvendhu Adhikari, who also hailed from the East Medinipur’s Kanthi, swore that he would defeat the TMC supremo by 50,000 votes on April 1 elections or else give up politics. Adhikari in the 2016 assembly poll on the TMC ticket had defeated his nearest CPI rival with over 80,000 votes where some over 2 lakh voters had cast their franchise.

Since then the political focus for both the TMC and BJP virtually restricted Nandigram and the two rivals, who fought together closely for nearly two decades before parting ways in late 2020, face each other before the voters.

Adhiakri family members claimed that they are real fighters against Nandigram’s land acquisition, for which the CPIM led Left Front faced defeat in 2011 elections. Father Sisir Adhikari, MP from Kanthi also joined the BJP and his younger son Soumendu also with the saffron brigade and now the battle for Nandigram restricted to the Adhikari family and Mamata Banerjee.

Although Prime Minister Narendra Modi is the face of BJP’s electioneering in West Bengal, the Adhikari family says they would present an MLA from Nandigram in the battle for ” double engine government’ in the state.

The West Bengal government had allowed the Salim Group to set up a chemical hub at Nandigram under the special economic zone policy. This led to resistance by the villagers with the formation of the Bhumi Ucchedh Protirodh Committee and a violent agitation left some 14 villagers were killed in the police firing.

Later TMC leader Mamata Banerjee visited there and took the leadership, being the then firebrand leader in the opposition.

While the Nandigram killing was an issue in the 2011 assembly poll in which the Communist government fell flat, the same constituency could not evoke much enthusiasm in the subsequent poll in 2016. But the same seat is now a hotbed of Bengal politics and autopsy of the 14 people was still being done in the mouths of the political leaders, who are trying to gain ground politically.

There is an outside chance, if any miracle happens for CPI(M) new horns Minakshi Mukherjee from Nandigram seat. However, she was quoted as saying she was no match for the chief minister and BJP candidate but her fight on issue based politics for which the Communists fight.

Nandigram has been in the news quite often for many wrong reasons like killing and fighting, says a political observer.

Barring the then CPIM led Buddhadeb Bhattacharya’s government positive move to have a special economic zone in East Medinipur’s Nandigram, the area was always in the news either for killing of the people or land occupation by the government.

But in recent electioneering the rival contestants promised a huge for the area and its people, who are now becoming monarch makers.