He said that the State Government would meet and discuss with them, and expressed hope that good things would prevail. 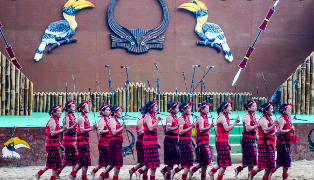 Kohima: Nagaland Department of Tourism and Art & Culture has geared up for the upcoming 23rd Hornbill Festival 2022 scheduled from December 1 to 10 at the Naga Heritage Village at Kisama and convened a coordination meeting with Naga tribal Hohos (apex Naga traditional bodies) in a grand manner to seek the cooperation and support of all the tribal Hohos and stakeholders.

After a meeting of the Naga tribal Hohos of the state on Monday, Nagaland Adviser for Tourism and Art & Culture H. Khehovi Yepthomi said since the COVID pandemic had affected the festival in 2020 and 2021, the State Government will do its best to celebrate the Hornbill Festival this year in a grand manner and two representatives from each Naga tribal Hoho attended the meeting, except tribal representatives from Eastern Nagaland People’s Organisation (ENPO) area.

Yepthomi regretted the decision of ENPO to abstain from the festival and said the discussion would be held with the organization to seek its participation in the event, adding that the cultural traditions of Eastern Nagaland were the main attractions of the event.

He also informed the gathering that through the Union Ministry of External Affairs, some international leaders were also expected to attend Hornbill Festival this year.

He said that the State Government would meet and discuss with them, and expressed hope that good things would prevail.

The Adviser highlighted the positive aspects of the festival and how it had helped put Nagaland on the world map of tourism and the Hornbill Festival belonging to all Nagas with the support from the tribal Hohos to ensure the festival was a success.

He requested the Naga tribal Hohos to start the renovation work of their respective tribal mornings (dormitories) at Kisama at the earliest, adding that Rs 1.50 lakhs has been earmarked for each tribe for the purpose.