India go down 0-5 to Brazil

Brazil was leading 2-0 in the first session with goals from Gabi Berchon in the 11th minute and Aline Gomes in the 40th minute. 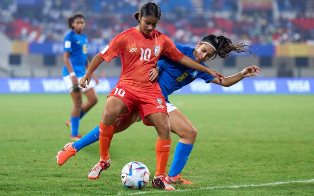 Bhubaneswar: Already out of contention India went down 0-5 to Brazil in their last Group A league play in the FIFA World Cup under-17 Women’s football championship at Kalinga Stadium here on Monday.

Brazil was leading 2-0 in the first session with goals from Gabi Berchon in the 11th minute and Aline Gomes in the 40th minute.

The scoreline increased after the breather as the South American side established complete domination with Aline shooting home her second goal.

Lara scored two long rangers in the 87th and stoppage time play to give the visitors a 5-0 victory In Group A. USA and Brazil moved to the quarter-finals from the group.

India had a fair chance to score a goal in the 36th minute, but their forward Neha missed the opportunity in a one and one situation with the Brazil goalkeeper.

India in the group league matches conceded 16 goals, half of them from the USA in the opener, and three goals from Morocco, also a debutante. They failed to score any goal.