According to official sources, the equipment for the Oxygen Plants was transported in a special IAF IL76 flight from Chandigarh. 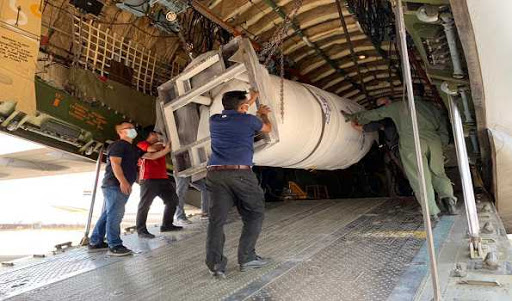 Kohima: In the backdrop of Centre’s announcement for installation of 551 ‘dedicated Pressure Swing Adsorption (PSA) Medical Oxygen Generation Plants inside public health facilities in the country,’ under PM CARES (Prime Minister’s Citizen Assistance and Relief in Emergency Situations) Fund in the District Hospitals of Kohima, Dimapur and Mokokchung the equipment for setting up three Oxygen Plants in Nagaland were airlifted into Dimapur airport by the Indian Air Force (IAF) yesterday.

According to official sources, the equipment for the Oxygen Plants was transported in a special IAF IL76 flight from Chandigarh. After the consignment was loaded from the Air Force Station Palam technical area tarmac, the aircraft landed in Dimapur airport at 3:45 PM yesterday (April 30). The consignment for the Oxygen Plants has been transported to designated locations in Kohima, Dimapur and Mokokchung and the plants would be set up “at the earliest.”

“The Indian Air Force has done the herculean task so far of carrying out 12 special missions comprising of C17 Globemaster , C130 Hercules IL 76, AN 32 and Dornier aircraft’s related with COVID-19 equipments carrying almost 80 tons in aid to the State Government,” said the report.

In an official statement, the Nagaland Government has thanked the IAF for bringing the consignment on time amidst the rising cases of COVID throughout the country. It also thanked all stakeholders, including IAF project office at Dimapur, Shillong-based Eastern Air Command headquarters, Air headquarters Delhi, Ministry of Defence, State nodal officers and DRC New Delhi, for their coordinated effort in making the mission a success, the report added.

Earlier, Nagaland Chief Minister Neiphiu Rio on Wednesday had written to Union Defence Minister Rajnath Singh seeking assistance in airlifting equipment meant for Oxygen Plants in Nagaland on an “urgent basis.” The long road journey time between Delhi and Nagaland as well as rapid surge of COVID-19 cases in the State were cited as the reasons behind the urgent request.