In a release, the Nagaland Joint Christian Forum (NJCF) condemned the killing of civilians at Oting in Mon district and said it is most unfortunate that the military has once again created an uneasy and disturbing situation in the land longing and yearning for peace. 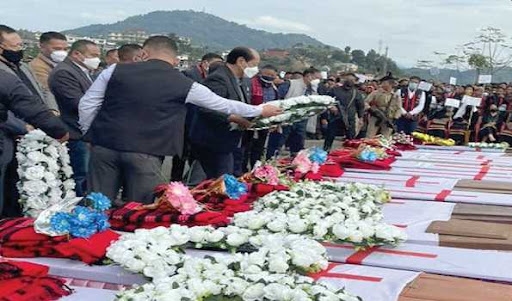 In a release, the Nagaland Joint Christian Forum (NJCF) condemned the killing of civilians at Oting in Mon district and said it is most unfortunate that the military has once again created an uneasy and disturbing situation in the land longing and yearning for peace.

It said the Nagas have always protested against the draconian law making the state the most fearful and uncivilized state in the country. It said AFSPA has emboldened such an action without a second thought and this is bound to happen again and again unless the Government of India seriously takes note of it and scraps it once and for all.

The Nagaland Baptist Church Council (NBCC) has held the Government of India accountable for such irresponsible crime against humanity and called for immediate redressal and booking of the culprits. In solidarity with the bereaved families and the people of Mon district, the Council called upon all its constituent member churches in Nagaland to observe corporate prayers on December 7 at 6:00 AM for the bereaved families and for peace.

The Fellowship of Naga Baptist Association (FNBA) called for urgent withdrawal of the inhuman law called AFSPA across all Naga inhabited areas and appealed to the conscience of those in authority to conduct a thorough investigation of the matter at hand.

The ruling Nationalist Democratic Progressive Party (NDPP), in sorrow and solidarity, directed all region offices, units and individual residences that the party flag is to be flown at half mast for the next three days.
A press release issued by the party said that such random and dastardly acts by the security forces are unimaginable and unfathomable. It asked the Government to urgently take up the issue of repealing of AFSPA, which is unnecessary and redundant in Nagaland’s present context, with the Government of India.

The Nagaland Pradesh Congress Committee (NPCC) said that the massacre of 13 innocent villagers is not only highhandedness by the security forces but is also a gross mishandling of security forces by the BJP led NDA Government at the Centre and the BJP alliance partnered UDA Government at the state. The party demanded Rs 1 Crore each as ex gratia to the deceased and Rs 10 lakh each to the injured as compensation.

The Naga People’s Front (NPF) said appealed to the Government of India to immediately remove AFSPA from Nagaland.

The National Peoples’ Party (NPP) reminded the Government of India once and for all that Nagas have had enough of the ruthlessness of the Indian Armed Forces under the shield and protection of the draconian AFSPA which has done more evil towards the innocents than bringing about anything progressive or developmental.

The NSCN (IM) has termed December 4 as a “black day” for the Nagas and stated that the absurdity and insanity of the Indian security forces has been exposed in the most brutish manner. In a press release from the MIP of the NSCN (IM) said although the ongoing Indo-Naga political dialogue that has seen much fruition during the period running more than two decades, the violence against the Nagas continues unabated. This is one of the most unfortunate incidents of the Indo-Naga ceasefire signed in 1997. It conveyed condolences to the bereaved families in this hour of grief.

The Working Committee (WC), Naga National Political Groups has urged the Government of India to declare an honorable and acceptable political solution to the Indo-Naga conflict to ensure all draconian laws in Naga homeland are repealed and done away with.

The Yung Aung led NSCN/GPRN while condemning the incident stated that empowered by its draconian laws; the Indian army has long used violence against Naga civilians as a key strategy in waging war against Naga revolutionaries.

Washington: Former US Secretary of State Mike Pompeo criticized President Joe Biden on Tuesday for making US policy on...
Manipur