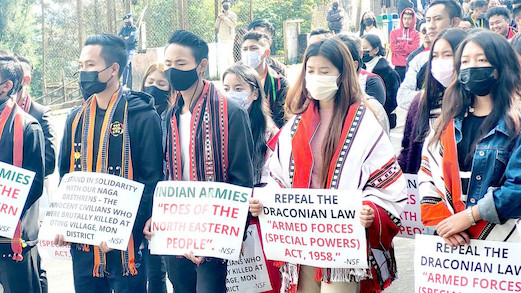 Kohima: The Naga Students’ Federation (NSF), apex body of student community under the aegis of the North East Students’ Organization (NESO), staged a sit-in dharna protest yesterday at Kohima in front of Raj Bhavan area in protest against the imposition of the Armed Forces Special Powers Act (AFSPA) in North Eastern states.

According to a release NSF President Kegwayhun Tep said the Naga people were shocked, angered, in grief and in disbelief at the extrajudicial and mindless killings of civilians by the armed forces in Mon. He demanded that the Government of India must immediately stop its policy of militarisation of the North East region on the pretext of solving the indo-Naga political issue through petty lip service.

The federation demanded that the Government of India set up a court monitored committee to be headed by a retired Supreme Court or High Court Judge empowered to conduct an impartial probe into the matter and bring the culprits to justice immediately.

Students took part at the dharna with placards demanding to repeal the Draconian Law AFSPA 1985, Indian Army foe of North Eastern people; we stand in solidarity with our Naga brethren – the innocent civilians, who were brutally killed at Oting village, Mon district and many others. The students also burnt the effigies of security forces with AFSPA written on them.

New Delhi: India has registered 14,917 new Covid-19 cases, the Health Ministry said on Monday. According to the bulletin issued...
Nation