The ceremony was flagged off by director of APEDA Tarun Bajaj and Agriculture Production Commissioner of Nagaland Y Kikheto Sema, sources said. 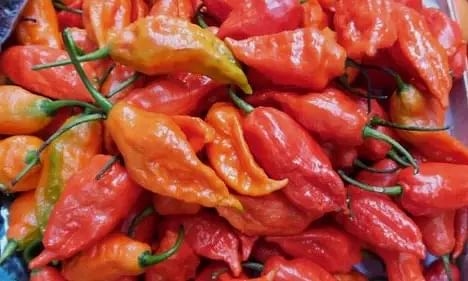 Kohima: Flagging-off ceremony of the export of the first consignment of King Chili (Raja Mircha) Grade-I, from Nagaland to London, was held virtually on Wednesday at Dimapur.

According to official sources, Nagaland Agriculture Production Commissioner Y Kikheto Sema in his address thanked the officials of Agricultural and Processed Food Products Export Development Authority (APEDA) for continuously supporting the Nagaland State Agriculture and Allied department in marketing the products of the state and called the success of exporting of the first consignment of King Chili (Raja Mircha-GI) from Nagaland to London a historical day for the Nagaland farmers.
He called upon the people of the state to focus on Agriculture and Allied departments since our state does not have any small or medium industries.

Sema also said, “Besides Raja Mircha, our state also produces pineapples, tree tomatoes, kiwi fruits, bamboo shoots, passion fruits and Kholar (Rajmah) which can also be exported internationally and also mentioned that Nagaland has been exporting coffee to Cape Town of South Africa since 2017 and coffee farming is being taken up in 10,000 hectare,” but he assured that by 2030 coffee farming will be taken up in 20,000 hectares.

Chief Executive Officer of the Nagaland State Agriculture Marketing Board (NSAMB) G Ikuto Zhimomi in his address also thanked the Guwahati Regional Office of APEDA, for their support and linking the farmers in the state for their production. He also said that the state would be exporting pineapples internationally in the coming years.

The ceremony was flagged off by director of APEDA Tarun Bajaj and Agriculture Production Commissioner of Nagaland Y Kikheto Sema, sources said.

Itanagar: Union Minister of State for Defence Ajay Bhatt on Wednesday visited Tawang in Arunachal Pradesh and received the...
Manipur